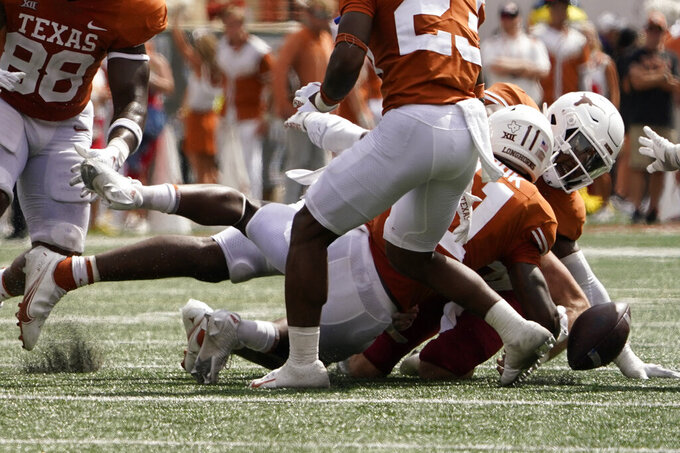 AUSTIN, Texas (AP) — Texas believes it's a tougher, more resilient team that last season — and the Longhorns are showing it so far this fall.

The latest evidence came Saturday as No. 22 Texas, trailing struggling Iowa State in the fourth quarter, rallied to win 24-21.

Quinn Ewers threw for three touchdowns, including the go-ahead, 3-yard pass to Xavier Worthy with 4:43 remaining. Linebacker Jaylan Ford produced two turnovers, including a fumble recovery with 2:28 to play.

The Longhorns (5-2, 3-1 Big 12) snapped a three-game losing streak against Iowa State and handed the Cyclones (3-4, 0-4) their fourth straight defeat.

Texas went 5-7 a year ago, Steve Sarkisian's first as coach. The Longhorns have worked to make wouldn't happen this fall.

“This is completely different than last year,” Robinson said. “We would have lost the game last year, in my opinion.”

There were indications that Texas might lose this one, too. Iowa State moved to the Texas 32 with two receptions by its spectacular receiver, Xavier Hutchinson. But Hutchinson also dropped a long one at the Texas 9,

“I came up short," Hutchinson said. "How I look at it, is if I make that catch we probably win the game.”

The Cyclones were still in position to pull off a surprise win, but quarterback Hunter Dekkers fumbled at the 32. Anthony Cook forced the fumble, Ford recovered, and the officials conducted a video review to determine if Dekkers' knee was down or if there was targeting by Texas.

Both reviews wenty the Longhorns' way.

“When I saw the ball out, like, I gotta go get it,” Ford said. “Shout out to Cook. He came down with a big hit on the ball.”

Iowa State, whose offense has struggled to score this season, had an opportunity to go up 14-0 six minutes into the second quarter. But Dekkers' pass was intercepted in the end zone by Ford.

The Longhorns then moved 80 yards to tie the game on a 15-yard pass from Ewers to Worthy. Less than six minutes later, Ewers connected with Jordan Whittington for a 5-yard touchdown.

Texas added a field goal in the third quarter but could not put Iowa State away. First, Dekkers found sophomore Jaylin Noel over the middle for a 54-yard touchdown, his second of the game. Dekkers, a sophomore first-year starter, completed 25 of 36 for a career-best 329 yards.

“I’m so proud of him,” coach Matt Campbell said. ”It's hard to battle through the growth process when the ball is in your hands every play."

Texas responded to Dekkers' run by moving 75 yards on 11 plays for the go-ahead score. Ewers connected with Robinson for 13 yards on third and six along the way.

“We didn’t play very good,” Sarkisian said. “But we played hard, and we played tough. Generally that’s the sign of a pretty good team when you can not play your best football, but find a way to win.”

Iowa State: The Cyclones, who rank 104th in scoring offense, failed to get a on 18 straight possessions in their past three games. The streak stopped on their third series against the Longhorns with a 5-yard pass from Dekkers to Noel in the first quarter.

Texas: The Longhorns were outgained in the passing game. Ewers threw for just 172 after passing for 294 and four touchdowns against Oklahoma last week. Ewers lost what could have been a 58-yard touchdown in the third quarter when a wide open Casey Cain dropped a pass down field. But Texas showed the resiliency to come back and win.

The Longhorns elevated from receiving no votes to a No. 22 ranking after their 49-0 win over Oklahoma last week. There's a good chance they won't lose ground.