No. 22 Tulsa gets 3-win Mississippi St. in Armed Forces Bowl 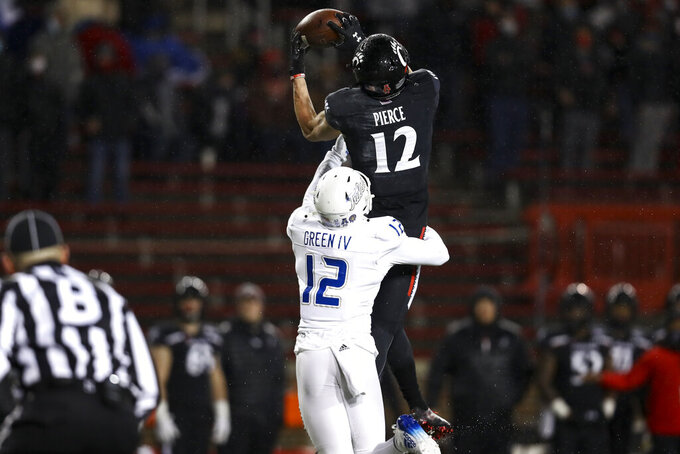 FORT WORTH, Texas (AP) — Three-win Mississippi State is set to wrap up coach Mike Leach's first season by becoming the first Southeastern Conference team to play in the Armed Forces Bowl, with a chilly Texas weather forecast that includes rain and wind.

The former Texas Tech and Washington State coach chooses to believe his players are looking forward to facing No. 22 Tulsa on Thursday and trying to finish a losing season on a winning note.

“Everybody was excited about the opportunity to play, or at least it appeared that way to me,” said Leach, coaching a Texas bowl game for the third time since Texas Tech fired him in 2009 after 10 seasons. “Maybe somebody in there’s not, but he’ll get his stack of gear and hopefully that’ll make him happy.”

The pandemic-altered season allowed the Bulldogs (3-7) to extend a school record with an 11th straight bowl appearance, joining Alabama, Georgia and Texas A&M as the only SEC schools to play in the postseason all those years.

Mississippi State quarterback Will Rogers is set for another start after setting the school freshman record with 1,828 yards passing in just five games after an injury sidelined Stanford graduate transfer K.J. Costello.

“I think sometimes records can be a little bit deceiving,” Tulsa safety TieNeal Martin said. “When I look at Mississippi State, I still see a crazy talented team that has all of the pieces there. They are playing together well.”

Tulsa quarterback Zach Smith is wrapping up a two-year stint as the starter after transferring from Baylor, where sixth-year coach Philip Montgomery was offensive coordinator and QBs coach before taking over the Golden Hurricane.

Tulsa (6-2) had a six-game winning streak stopped on the final play of a rainy American Athletic Conference championship game, when undefeated Cincinnati kicked a field goal for a 27-24 victory.

“Any time you get a chance to go head to head with a quality team like this it helps from a recruiting standpoint,” Montgomery said. “It’s the last game, so it’s the last impression that you’re going to get to make. I think all of those things pay dividends.”

The pass-happy Bulldogs are facing a forecast for a late-morning kickoff that calls for a temperature around 40 with a strong north wind and a 100% chance of rain, possibly an occasional downpour.

“I mean, the NFL does it all the time," Leach said. "Any time our guys want to complain about cold weather, I just remind them what the weather is in Buffalo, in Green Bay, Chicago, Minnesota, New England, the Giants, the Jets. The list goes on: Denver, Kansas City, Seattle, we can go on and on. But no, you just keep them warm with the warmers and then just relax and catch it.”

Tulsa linebacker Zaven Collins, the Nagurski Trophy winner as the nation's best defensive player, opted out of the bowl game and declared for the NFL draft after finishing with 11½ tackles for loss and four interceptions, two returned for touchdowns, in eight games.

While Collins missed most of the second half against Navy with an injury, defensive tackle Jaxon Player had his best game of the year in a 19-6 victory. The junior had a team season-high 4½ tackles for loss and two sacks.

The Bulldogs have had 26 first-time starters this season, tied for the most in the Football Bowl Subdivision. Nine freshmen are among the 27 players to make their debuts for Mississippi State. Walley, left tackle Charles Cross and cornerback Emmanuel Forbes made the SEC's all-freshman team. Cross was the only one of the three to take a redshirt year.

“We’re excited that the young guys got the recognition they did, and there were some others that I think would be very close,” Leach said. “We have pretty good freshmen that, although they weren’t freshman all-SEC, they were good players for us.”

The Golden Hurricane finished in the top 30 nationally in several key defensive categories. Those most relevant against Leach's offense are passing yards (21st at 194.8 per game) and pass efficiency defense (22nd at 119.8). Tulsa will lean on the experience of cornerbacks Allie Green IV and Akayleb Evans, who have 46 career starts between them.

“They are going to dink and dunk and keep moving chains and all of the crossing routes and all of the things they do so well within their offense like getting the back out and using him,” Montgomery said. “Then all of a sudden, you feel like you have a good grasp of that and then somebody slips by you. You have to eliminate those big plays.”