No. 22 Tulsa seeks berth in AAC title game with win vs Navy 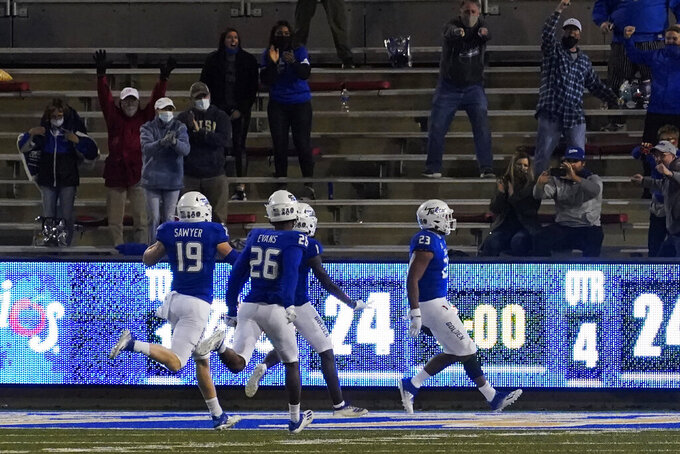 Riding a five-game winning streak after working its way around a constantly changing schedule, No. 22 Tulsa must overcome an old nemesis Saturday to clinch a berth in the American Athletic Conference title game.

The Golden Hurricane (5-1, 5-0, No. 24 CFP) face Navy (3-5, 3-3) in a game originally scheduled for Nov. 7 but postponed because of an outbreak of COVID-19 at the Naval Academy. Tulsa has endured five postponements and two cancellations thus season, yet has managed to put itself in position to face Cincinnati in the league championship game by virtue of a five-game run that includes four comeback victories.

Navy has lost three in a row but has defeated Tulsa in each of the last five years, scoring no fewer than 31 points in each game.

“We’ve got to do a real job of being prepared," Tulsa coach Philip Montgomery said. “This is a team we’ve had really good games with but haven’t come out on top in a long time."

This, however, is not a typical Navy squad. The Midshipmen have had trouble replacing standout quarterback Malcolm Perry, now an NFL wide receiver. Perry was a master at running the triple option that Navy thrives on, and none of the three quarterbacks used this season have come close to duplicating that success.

“All of them have done good things and they’ve done bad things," coach Ken Niumatalolo said. “We’ve got to play better at that position. We’re still looking right now, and for that to happen this late in the season, that’s not a good deal."

And that is why Niumatalolo dismisses Navy's past success against Tulsa, including a 45-17 rout last year in Oklahoma.

“You look at tape of the game because it's the last time we played them, but you realize our quarterback is now playing for the Dolphins," he said. “Whatever happened last year has no bearing on this game. Totally different team. They’re playing really, really well."

Tulsa is led on defense by 6-foot-4 linebacker Zaven Collins, who leads the Golden Hurricane in tackles and sacks and has returned two of his team-high four interceptions for touchdowns.

“ Probably the best defensive player in our league," Niumatalolo said. “He’s bigger than our defensive linemen. He can run, he can cover, he can hit and he’s smart."

NELSON ON A RUN

Navy senior Nelson Smith leads the team with 589 yards rushing, including 142 last week in a 10-7 loss to Memphis.

“Nelson is running really well but we’ve been really inconsistent in our option game," Niumatalolo said. “Some of it is the quarterback reads, some of it’s the perimeter blocking. We’re an option team, and right now we’re not a very good option team.“

Navy currently ranks 40th in the nation in rushing. The Midshipmen are averaging 192.8 yards rushing per game, their lowest average since 2001.

Tulsa has been outscored 46-12 in the first quarter but has displayed a knack for coming up big when it counts.

The Golden Hurricane has rallied from double-digit deficits to win four games, including a comeback from a 21-0 hole against SMU, and has outscored the competition 67-33 in the fourth quarter and overtime.

Navy has won its last 17 games on Senior Day, the final home game for upperclassmen at the Academy. Smith hopes to part of the team that make it 18.

“We had a lot of guys fall off who aren’t part of the team, but the ones that are still here right now, they’re the strong ones," Smith said. “You know those guys have your back. Those are the guys you want to have in your foxhole."