No. 22 UCF heavily favored in AAC opener against UConn 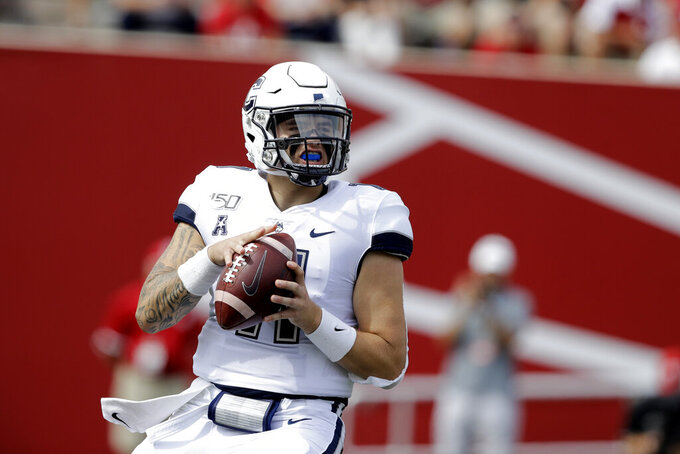 UCF begins American Athletic Conference play, looking to rebound from its first regular-season loss since 2016. The Knights tumbled seven spots in the Top 25 after falling 35-34 last week at Pittsburgh, and it'll be an uphill battle to fight their way back into the discussion about who might be worthy of consideration for berths in the College Football Playoff, even if they manage to go unbeaten in conference play for a third consecutive year.

UCF leads the AAC in total offense (559 yards per game) and scoring (47.2), however the defense (299.5 yards, 19 points) has been solid and figures to be tough matchup for sputtering UConn, which is last in the conference in total offense (274 yards) and scoring (16.7 points). The Huskies were limited to 145 yards during last week's 38-3 loss at Indiana.

UConn: QB Jack Zergiotis, who's making his third straight start, has thrown for 365 yards, no touchdowns and three interceptions in the past two games. RBs Kevin Mensah (205 yards, two TDs) and Art Thompkins (125, one TD) lead the Huskies in rushing, while Thompkins has a team-leading nine pass receptions.

UCF: Freshman QB Dillon Gabriel threw for 338 yards and two TDs against Pitt, but also tossed the first two interceptions of his college career. He's completed nearly 61 percent of his passes for 1,057 yards and 11 TDs. WR Gabriel Davis has 20 receptions for 380 yards and five TDs, and WR Tre Nixon has 18 catches for 285 yards and two TDs. RBs Greg McCrae and Adrian Killins Jr. have combined for six TDs on the ground.

UConn is 0-6 in AAC openers. ... Through three games, the Huskies have four rushing TDs, but none passing. ... UCF has scored at least 30 points in 30 consecutive games, the longest such streak in the Football Bowl Subdivision since 1936. ... The Knights have won 17 straight home games. Alabama (28) and Clemson (18) are the only FBS programs with longer streaks.