No. 22 UCF looks to rebound in AAC opener against UConn 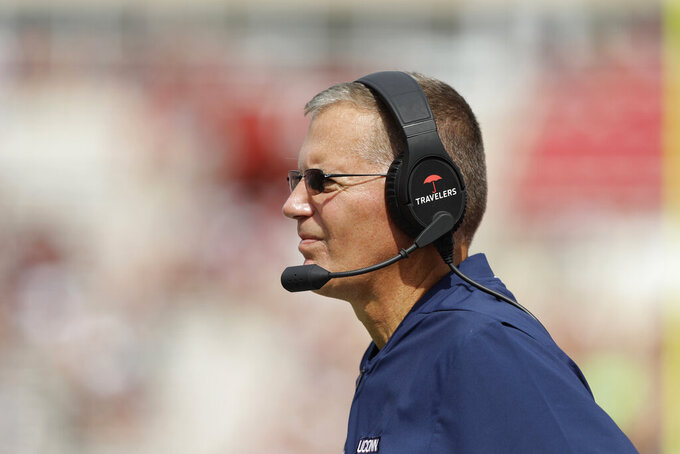 ORLANDO, Fla. (AP) — Josh Heupel says losing in the regular season for the first time since 2016 won't change the way No. 22 UCF goes about its business in pursuing a third consecutive American Athletic Conference title.

The Knights (3-1, 0-0), coming off a 35-34 road loss to Pittsburgh that stopped a 25-game regular-season winning streak, compiled an impressive resume over the past two-plus seasons.

While losing last week was disappointing on a late trick play, Heupel said it will not affect how the team approaches the remainder of the year. That includes the league opener against Connecticut (1-2, 0-0) on Saturday night.

A season "defines itself one week at a time. We have a mantra of going 1-0. It doesn't change whether you win the previous week or lose the previous week," Heupel said of the message to his players.

"It had been a long time since our players had felt that during the course of regular-season play," the coach added. "It's important in that moment to: One, know that it hurts but, two, understand that doesn't define the whole season."

The loss to Pitt dropped the Knights seven spots in the Top 25 and knocked the Knights out of the conversation about which teams ultimately might be worthy of consideration for berths in the College Football Playoff. However, the team's foremost goal — another AAC title — remains intact.

Not that Heupel and his players are looking beyond UConn. The Huskies are 0-6 in conference openers since formation of the AAC, including a 56-17 season-opening loss to the Knights at home a year ago.

UConn coach Randy Edsall has an appreciation for what UCF has accomplished since the start of 2017 and noted that coming up with a game plan to pull off an upset won't be easy. It will take more than using a similar strategy after watching video of Pitt's win. The fourth-down call in the final seconds had wide receiver Austin Mathews throw to quarterback Kenny Pickett in the end zone for the victory.

In addition to going 13-0 two years ago, UCF stormed through another unbeaten regular season before winning the AAC Championship Game and finishing 12-1, with the only loss coming to LSU in the Fiesta Bowl.

"That's hard to do," Edsall said, "And they came within a whisker of keeping that streak alive."

Freshman quarterback Dillon Gabriel has been a big part of UCF's fast start this season. He shared playing time with Notre Dame transfer Brandon Wimbush in the season opener before starting the past three games. He threw for 338 yards and two touchdowns against Pitt, but also tossed the first two interceptions of his college career. Coming off the Knights' first loss, it will be interesting to see how he plays against UConn.

The Huskies, gaining just 145 yards in a 38-3 loss at Indiana, are last in the AAC in total offense (274 yards per game) and scoring (16.7). Quarterback Jack Zergiotis has yet to throw a TD pass. That trend will need to change for UConn to have a chance Saturday night. UCF leads the league in total offense (559) and scoring (47.2). The Knights have scored at least 30 points in 30 consecutive games, the longest streak in the Football Bowl Subdivision since 1936.