No. 23 Auburn tries to rebound with visit from Georgia State 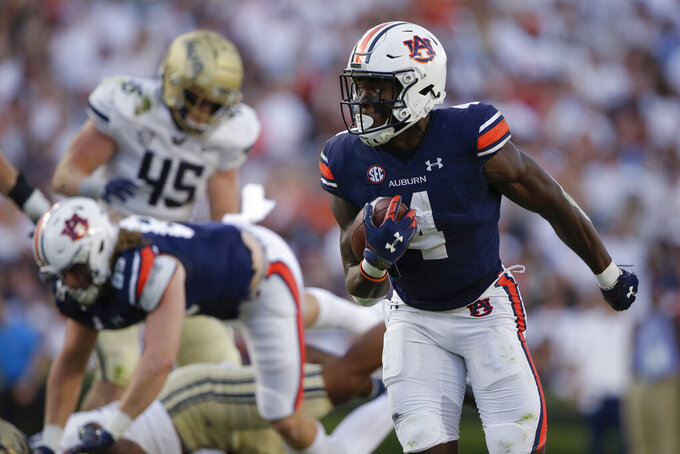 Auburn running back Tank Bigsby (4) carries the ball in for a touchdown against Akron during the first half of an NCAA college football game Saturday, Sept. 4, 2021, in Auburn, Ala. (AP Photo/Butch Dill)

Line: Auburn by 27 ½, according to FanDuel Sportsbook.

Auburn is trying to bounce back from its first defeat under coach Bryan Harsin, 28-20 at No. 6 Penn State. After this, the Tigers open Southeastern Conference play at LSU. Georgia State wants to build on its first win of the season, 20-9 over a previously unbeaten Charlotte that has a win over Duke.

Auburn didn't muster much of a pass rush against Penn State, but does have the nation's No. 3 rushing defense. The Tigers are allowing 45.7 yards per game on the ground. The Panthers counter with an offense that ran for 298 yards — seventh most in program history — against Charlotte with four players topping 60 yards.

Georgia State: LB Blake Carroll is coming off a huge game against Charlotte. Carroll had nine tackles, a sack and a pass breakup. He also forced a fumble at Georgia State's 13 to help the Panthers preserve a 13-9 lead late in the third quarter.

Auburn: RB Tank Bigsby has opened the season with three straight 100-yard rushing games. The physical, hard-to-bring down Bigsby is averaging an SEC-best 7.3 yards per carry. Shaun Shivers could rejoin Bigsby and freshman Jarquez Hunter in the backfield after missing the past two games for undisclosed reasons.

Auburn is 22-0 all-time against current members of the Sun Belt Conference, with every game played at home. ... The Tigers have won their last 29 homecoming games. ... Auburn kicker Anders Carlson has made 12 consecutive field goals, a career-best and the fourth largest current streak in FBS. ... The Panthers allowed just 276 total yards against Charlotte, the program's seventh-best single-game performance and the fewest yards allowed since 2018 (262 yards against Louisiana-Monroe). ... Georgia State hasn't played an SEC team since beating Tennessee 38-30 in the 2019 season opener. It was the program's first win over a Power Five team.