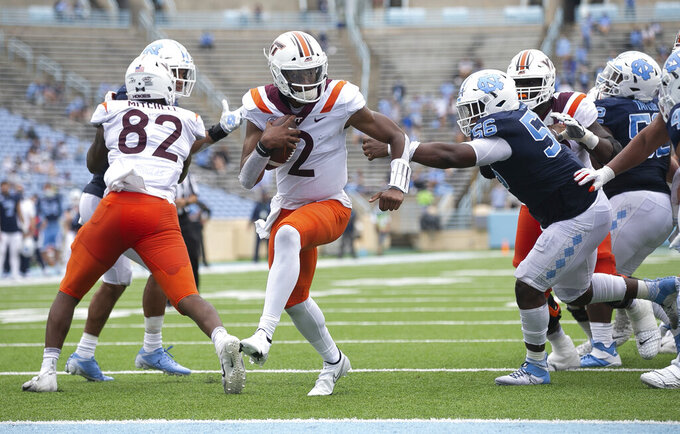 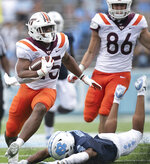 Virginia Tech coach Justin Fuente and the No. 23 Hokies have battled two opponents each time they have taken the field: the other team and COVID-19.

It’s unclear how many players the Hokies will be missing due to cornavirus-related issues when they face Boston College (3-1, 2-1 Atlantic Coast Conference) on Saturday night, but nearly 20 have sidelined each week over the first three games.

They were first missing 23, then 21 and the last time out 15, and the decrease in the numbers hasn't necessarily meant things have gotten easier for the Hokies (2-1, 2-1).

“The last two weeks, it’s been really concentrated in places that were already thin to begin with,” Fuente said. “That’s had a pretty adverse effect on us.”

A depleted defensive backfield created issues in a 56-45 loss at No. 5 North Carolina last Saturday, but not necessarily where one might expect. Virginia Tech gave up 257 yards and three touchdowns through the air, but also 399 yards and five touchdowns on the ground.

The Tar Heels averaged 9.3 yards per carry, including a 62-yard run by Michael Carter with 8:49 to play that essentially put the game out of reach at 56-37. The run also represents more yardage than the Eagles have averaged on the ground per game (60.2 yards).

Boston College’s Phil Jurkovec has fueled the Eagles' offense. He is averaging more that 295 passing yards with eight touchdowns and two interceptions.

Defensive lineman Emmanuel Belmar said the Hokies’ front look forward to the chance to put pressure on Jurkovec, “but you know, going off of last week, what we gave up, they might come out running the ball, so we've got to be prepared for both," he said.

On defense, Eagles coach Jeff Hafley knows where his team's priorities are this week. The Hokies have gotten starting quarterback Hendon Hooker back after a COVID-19 quarantine kept him out, only enhancing a rushing attack led by graduate transfer Khalil Herbert. He averages 149.7 yards, the Hokies 299.3, both ACC highs.

“The number one thing with our defense every week is stopping the run because if we can’t stop the run, we have no chance,” the Eagles’ first-year coach said. “We'll continue to do so. It is one of the best rushing attacks in college football. I mean, 300 yards is crazy. We have to prepare and strap our shoulder pads on a little bit tighter and go to work.”

Some other things to watch when Boston College visits Virginia Tech:

With the ACC testing teams three times a week -- Monday, Wednesday and Friday -- Fuente won’t know until Friday night at the earliest who he’ll have to do without. He is likely to have Hooker, his dual-threat quarterback who has been playing himself into shape.

If the Eagles continue to try to move the ball through the air against a depleted Hokies’ secondary, it could be a big day for Zay Flowers. After totaling just 22 receptions for 341 yards in 13 games in 2019, the sophomore already has 21 catches for 405 yards and four touchdowns in 2020.

Herbert has been a revelation for the Hokies. Besides his ACC-best rushing average, he’s tied for second with five touchdowns, second in kickoff return average at 34.9 and tops in all-purpose yards 246.3. Don't expect fatigue slow down Herbert, who said: “I’m just relishing every opportunity."

Last week’s showing left Virginia Tech last, or near the bottom, in most defensive categories among ACC teams, but they are fourth in sacks with 14 through three games. Sacks can lead to fumbles, or rushed passes that get intercepted, and that could be a problem for the Eagles, who are 13th in the ACC, allowing four sacks per game.

The teams have met every year since both became ACC members, with streaky results. Virginia Tech holds a 10-7 lead over Boston College as ACC rivals, but BC has won the last two meetings, including 31-21 two years ago at Lane Stadium. The Hokies are just 7-5 against BC at Lane Stadium.