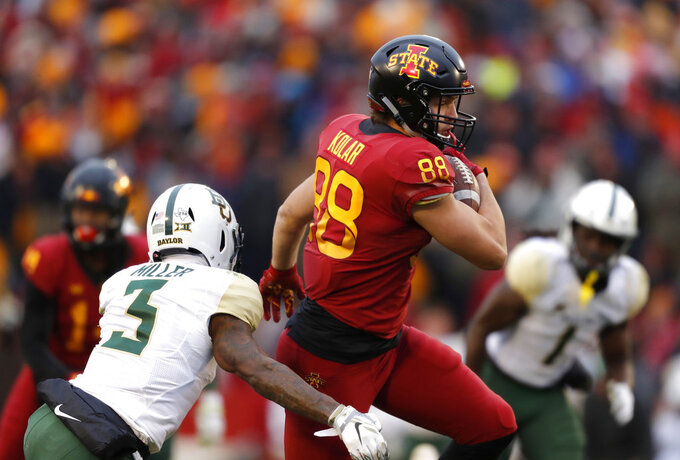 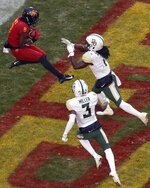 Now the Cyclones have to wait and see on the status of star running back David Montgomery.

Brock Purdy threw for a touchdown and ran for another score, and No. 23 Iowa State topped Baylor 28-14 on Saturday after a skirmish in the third quarter resulted in unsportsmanlike conduct penalties for each player on both teams.

Purdy threw for 230 yards as Iowa State (6-3, 5-2, No. 22 CFP) won a fifth straight Big 12 game in the same season for the first time. Deshaunte Jones added a TD reception and threw for a 2-point conversion, and Iowa State shut out Baylor on five of its seven trips to the red zone.

"There's still a lot of work to be done. We're still a young football team," Iowa State coach Matt Campbell said. "I think what's exciting is that I sit here right now knowing that our best is still out there."

Baylor (5-5, 3-4) answered with a Charlie Brewer TD pass, but Matt Eaton fought through a defensive pass interference call for a 38-yard catch that set up Johnnie Lang's 8-yard touchdown run and a 28-7 Cyclones lead.

The game took an ugly turn when Montgomery and Baylor linebacker Greg Roberts were ejected after briefly fighting each other early in the third.

The Cyclones and Bears nearly came to blows when a previous play ended up spilling over onto Iowa State's bench. The bad blood hung around, and the teams nearly staged a full-on brawl during a wild incident that included Roberts slapping Montgomery on the helmet, and Montgomery swinging away in response.

Campbell said he wanted to review the tape before commenting on the incident, though he did defend Montgomery.

"David is a leader, so the last thing that I would say that David Montgomery had anything to do with was starting any controversy," Campbell said. "It certainly looked like it was a secondary action."

Montgomery finished with 53 yards rushing. The Big 12 will review the incident, and Montgomery could be suspended for the first half of next weekend's huge game at Texas.

Brewer threw for 288 yards and two touchdowns. But he was ejected for his second unsportsmanlike penalty with 5:51 left.

"This was a case of us beating ourselves and not taking advantage of opportunities, most importantly in the red zone and playing at the end of the game without our quarterback because of the earlier decisions by someone else to get involved in a fight," Baylor coach Matt Rhule said.

Iowa State: Bowl eligibility used to be the main goal at Iowa State, but not anymore. The Cyclones, once 1-3, can clinch a once-improbable spot in the Big 12 title game with two more wins and a West Virginia loss — and the Mountaineers still have to play Oklahoma. "It's just a mark of who we are, and who we've been coached up to be," receiver Hakeem Butler said.

Baylor: A win over TCU or Texas Tech in its final two games would send the Bears to a bowl game — and, perhaps more importantly, an extra month of practice for their rebuilding efforts.

Baylor appeared to gain a first down inside the Iowa State 1 late in the second quarter on a catch by Marques Jones. Brewer then quick snapped and sneaked into the end zone, which would have made it 14-6. But officials waved Brewer's TD off, reviewed the Jones reception and waved that off after it showed the ball clearly hit the ground. Connor Martin then badly shanked a 29-yard field goal.

With 8:05 left, Chris Platt beat Iowa State's defense on a vertical route and was open near the end zone. Brewer hit a diving Platt on the hands, but the ball instead went through them. That drive ended on downs at Iowa State's 12 with 4:49 left.

Montgomery used his Twitter account to apologize for his ejection, saying in part that he "should have not reacted the way I did and I sincerely apologize for that!!! But I will defend my brothers no matter what and i stand on that!"

Iowa State faces No. 15 Texas in Austin next week.

Baylor hosts TCU on Saturday in its home finale.