No. 23 Iowa tries to spark offense after 2 straight losses 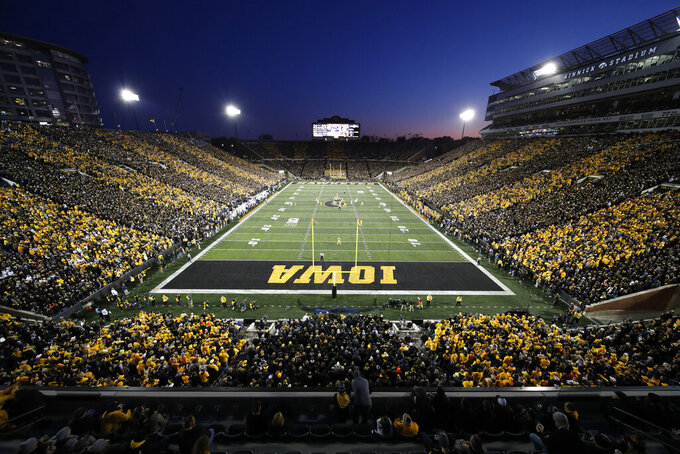 Jackson, the junior left tackle on the No. 23 Hawkeyes' offensive line, wasn't about to point fingers Tuesday. He knows there is plenty of blame to go around and figures there are ways to solve things.

"Just be a team. Just communicate," he said. "It's on everybody's hands, to be honest. It's not just one guy's fault."

Iowa (4-2, 1-2 Big Ten) has lost back-to-back games to Michigan and Penn State, scoring just 15 points in all. The Hawkeyes, who scored in every quarter of their first four games, have had just one touchdown and three field goals in their last eight quarters. They also have six turnovers the last two games after just one in the first four. There have been penalties — eight against Michigan — to go with mental mistakes.

Quarterback Nate Stanley was sacked eight times in the 10-3 loss to Michigan, and then twice in Saturday's 17-12 defeat to Penn State.

Stanley credited opposing defenses with some of the issues, but he, too, knew much of the blame fell on the Hawkeyes.

"When it comes down to it, we're the ones who have held on to the ball (too long) or committed the penalties," Stanley said. "Ultimately it comes down to us. If we execute better, we'll put points on the board."

Tight end Nate Wieting agreed, and said he thinks the team is "really close" to playing the best it can.

"I think you have to have some patience as a player, that not everything is going to be perfect," Wieting said. "Sometimes, you're going to feel like you're spinning your wheels. But that's the time where you really have to focus."

That was the similar message from coach Kirk Ferentz.

"Whatever it is we're doing that's not performing well enough to get us in a winning margin, we just got to try to focus on that, improve it," Ferentz said. "Really doesn't matter what position it is. If we're not quite getting it done, it's always frustrating. We want to do well. But the good news is, we've seen our guys play better. We'll keep focused on that, see if we can't get back up a little bit better."

"Everything goes hand-in-hand on offense, in my opinion," Ferentz said. "At some point in the season, somebody is not going to let you run it, you got to throw it, and vice versa. You got to be able to do both to be a successful team, unless you live off the option or throw it every snap of the game type team."

Every game for the rest of the regular season will be against Big Ten West opponents, so the Hawkeyes haven't given up hope of winning the division, although they'll need some outside help.

"Obviously, it's frustrating that we haven't won," Stanley said. "But I don't think anyone's attitude or demeanor has diminished. I think everybody's been upbeat and positive, knowing that we still have some goals out there on the table."