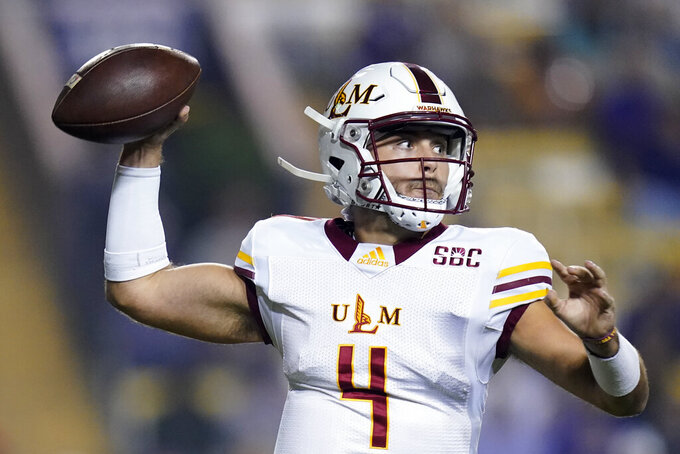 Line: Louisiana-Lafayette by 21 1/2, according to FanDuel Sportsbook.

Louisiana-Lafayette has already clinched a home berth in the Sun Belt Conference title game but needs to win to remain in the national rankings, go unbeaten in Sun Belt play for the first time and to optimize bowl possibilities. It's a rivalry game for Louisiana-Monroe, which is no longer bowl eligible.

Louisiana-Lafayette is averaging 194.7 yards per game on the ground as it runs into a ULM defensive front that has held five opponents below 100 yards rushing this season.

Louisiana-Lafayette: QB Levi Lewis is 32-7 as the Ragin' Cajuns' starter and has passed for at least three TDs in a game four times this season. His 72 career TD passes are the most in program history.

Based on opponents' win-loss records, ULM has faced the nation’s 18th-most difficult so far this season with its 12 opponents having a combined record of 72-49 (.595). ... The Warhawks rank as the least-penalized team in the Sun Belt and one of the least-penalized teams at the FBS level with 3.73 penalties per game. The Warhawks also lead the SBC and are fourth among NCAA FBS teams at 34 penalty yards per game. ... Louisiana-Lafayette is riding a program record 10-game winning streak and can improve to 16-0 against Sun Belt West Division teams under current coach Billy Napier. ... The Cajuns are pursuing their first perfect record in Sun Belt play. ... The Cajuns entered the week ranked 13th nationally in scoring defense, allowing 18.7 points per game. ... Louisiana-Lafayette is plus-11 in takeaways during its past four games.