No. 23 Memphis seeks to remain unbeaten as it visits Temple 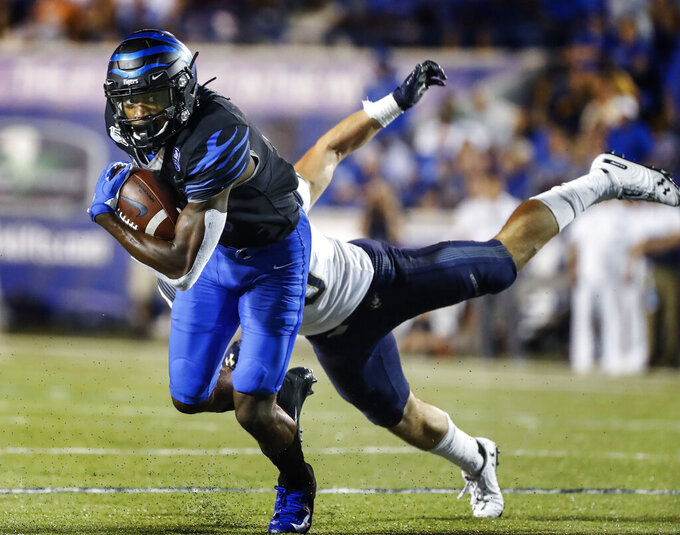 Memphis running back Kenneth Gainwell vs. Temple's run defense. Gainwell has emerged as one of the nation's most productive running backs since taking over for an injured Patrick Taylor Jr. early this season. Gainwell has run for 620 yards and averages 124 yards rushing per game to rank sixth among all Football Bowl Subdivision players. The redshirt freshman has exceeded the 100-yard mark in three straight games, including a 209-yard performance last week in a 52-33 victory over Louisiana-Monroe. Temple ranks second in the AAC in run defense and is yielding 3.2 yards per carry and 125.6 yards rushing per game.

Memphis: QB Brady White has thrown three touchdown passes in each of Memphis' last three games. He ranks seventh among all FBS players in passing efficiency (184.95) and 13th in completion percentage (.717).

This is the fourth time in school history that Memphis has started 5-0. Memphis also won its first five games in 1938, 1961 and 2015. ... Temple is attempting to beat a ranked team for the second time this season. Temple beat Maryland 20-17 on Sept. 14 when the Terrapins were ranked 21st. ... Temple's Re'Mahn Davis has rushed for 503 yards, the most of any FBS true freshman. ... Temple ranks second among all FBS teams in red-zone defense and fourth in third-down conversion percentage defense . Temple is allowing teams to convert just 24.4% of their third-down situations.