No. 23 Mississippi St looks to keep rolling vs Arkansas 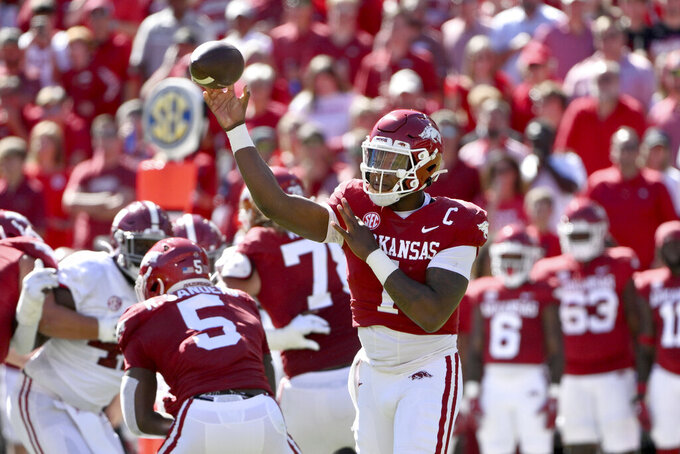 Mike Leach says he doesn’t care about the rankings, just the results.

That No. 23 Mississippi State is ranked for the first time this season is a good indicator of how the Bulldogs are playing.

MSU (4-1, 1-1 SEC) seeks a third consecutive victory in Saturday’s meeting against suddenly-struggling Arkansas (3-2, 1-2). Since dropping the SEC opener at LSU, the Bulldogs have reeled off consecutive 40-point efforts against Bowling Green and then-No. 17 Texas A&M, the latter of which marked their most complete performance this season.

They never trailed in the 42-24 victory over the Aggies, and got touchdowns from everywhere. Decamerion Richardson’s 50-yard return of a blocked kick for a score broke the game open in the third quarter, with the offense and defense doing their part to seal it.

“Special teams figured in as well and what you want is complementary football, where all phases are holding up their end.”

Arkansas seeks to bounce back from consecutive losses to A&M and then-No.2 Alabama 49-26 that knocked the Razorbacks out of the rankings.

The Hogs dug a 28-0 hole against the Crimson Tide before storming back to within five after Bryce Young left with an injury. Alabama pulled away again and left Arkansas seeking answers.

The biggest question is whether mobile quarterback KJ Jefferson will be available. He left in the fourth quarter with what coach Sam Pittman later described as mild symptoms after hitting his head.

Jefferson (1,096 yards passing, nine touchdowns) had not practiced as of Wednesday morning as Pittman awaited an update. Senior Cade Fortin and sophomore Malik Hornsby are ready if Jefferson can’t play.

Asked if he might use both QBs’ Pittman said, “I think there’s a real possibility that we would do that. Certainly, we would go with a hot hand, In our game plan, there’s certainly opportunities for both those kids to play if KJ can’t.”

MSU quarterback Will Rogers completed 31 of 45 passes for 329 yards and three TDs against A&M and leads the SEC in passing. He has thrown for at least 300 yards and three scores in 13 of 27 contests and is six completions shy of the conference record of 921 set by Georgia’s Aaron Murray from 2010-13.

Arkansas features the nation’s sacks leader in junior linebacker Drew Sanders (6.5, 43 tackles), an Alabama transfer who anchors the SEC’s top pass rush. The Hogs managed just one sack against the Crimson Tide but still have 21, just two behind FBS leader Cincinnati. Junior lineman Jordan Domineck is tied for 15th with 4.5 sacks and the school’s active career leader with 13.5.

Bulldogs running back Jo’quavious Marks has a 28-game reception streaks that ranks as the SEC’s second longest. He’s the current active conference leader with 5.54 receptions per contest and 10th in all-purpose yards with 70.8.

MSU defensive back Emmanuel Forbes leads the SEC with three interceptions, including two in an all-around career day against Texas A&M. He returned one 33 yards for an exclamation-point touchdown that provided his school-record fourth pick-six, and blocked the kick that Richardson returned 50 yards for another TD.

Arkansas running back Raheim Sanders has rushed for a SEC-best 609 yards that ranks fifth nationally. MSU counters features Dillon Johnson, who ranks 10th with 302 yards but third with 6.04 yards per attempt.

By Ralph D. Russo 1 minute ago
By Mark Anderson 39 minutes ago
2 hrs ago
By Gary B. Graves 4 hrs ago
5 hrs ago