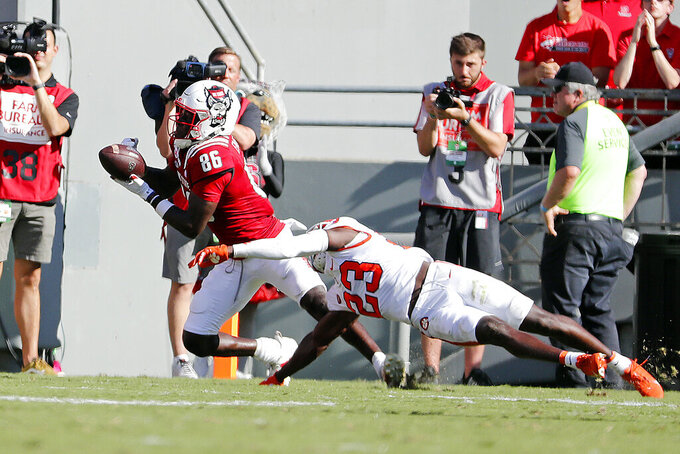 North Carolina State's Emeka Emezie (86) hauls in a pass for a touchdown over Clemson's Andrew Booth Jr. (23) during the first half of an NCAA college football game in Raleigh, N.C., Saturday, Sept. 25, 2021. (AP Photo/Karl B DeBlaker)

North Carolina State is following its upset of then-No. 9 Clemson in Atlantic Coast Conference play by stepping out of league play for its final nonconference matchup. Dave Doeren’s team stands as the ACC’s highest-ranked team. The Bulldogs are also playing their nonconference finale and seeking a win against a power-conference opponent after a close loss to Mississippi State to open the season.

Louisiana Tech: WR Tre Harris. The freshman leads the team with 215 yards receiving and three touchdowns, including a 62-yard score against SMU.

N.C. State: WR Emeka Emezie. The senior had career highs of 14 catches for 116 yards with a touchdown in the Clemson win, proving to be a reliable target for quarterback Devin Leary.

Bulldogs coach Skip Holtz wasn’t sure if quarterback Austin Kendall would be ready for this game after he missed last week’s win against North Texas due to “medical reasons.” … Holtz coached his first game at Louisiana Tech against N.C. State in 2013, which also marked Doeren’s first game with the Wolfpack. … Both teams have lost at Mississippi State this season. … Louisiana Tech’s two losses have come by a combined three points. … Leary has completed 75% of his passes over the past two games for N.C. State.