No. 23 SMU bounces back by outscoring East Carolina 59-51 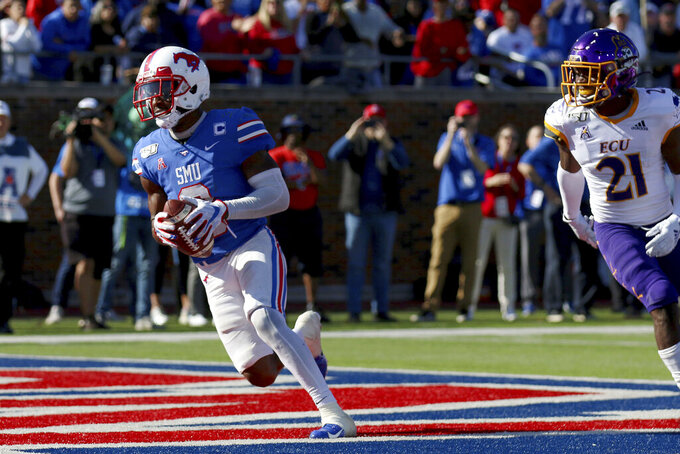 DALLAS (AP) — If there was any concern about a letdown coming off a first loss that changed the course of the season for No. 23 SMU, it disappeared in another wild, high-scoring game.

SMU (9-1, 5-1 American Athletic) played from ahead and kept it that way in a second straight game with more than 1,000 combined yards. The Mustangs had fallen behind and failed to close the gap last week in a 54-48 loss to No. 19 Memphis.

Tight end Kylen Granson caught three touchdown passes, including a 31-yarder on fourth-and-20 with SMU leading 45-44 midway through the fourth quarter. Granson had seven receptions for 138 yards, while James Proche finished with 14 catches for 167 yards.

"We got our head right," said Granson, a Rice transfer who sat out last season and now has eight touchdowns. "We knew ECU was a good team that could score a lot. Our focus was, 'All right, we've got to be 9-1. We've got a lot to play for still.'"

On the kickoff that followed Granson's third score, East Carolina's Jsi Hatfield couldn't pick up the loose ball around his 15-yard line and SMU recovered. That led to Proche's second touchdown catch.

Proche, a senior, had broken Emmanuel Sanders' school record with his 35th career touchdown catch on his first score of the day.

Jones, who ran for 157 yards, had three rushing touchdowns for the third time this season. Jones has 20 total touchdowns (18 rushing and two receiving), one more than the Pro Football Hall of Famer Dickerson had in 1981 — all on the ground.

SMU started 8-0 for the first time since Dickerson was leading the Pony Express in his final season in 1982. But the loss to Memphis left the Mustangs needing help to reach the AAC championship game even if they win their final two regular-season games.

"Our guys showed up on Sunday and had the exact frame of mind we wanted them to have," SMU coach Sonny Dykes said. "We didn't have to beg them to practice. They showed up and handled their business."

"He hits the home run, big pass play, comes jogging off and he just looks at me and says, 'Next play,'" East Carolina coach Mike Houston said of Snead. "He is what you want in a player. The toughness, the competitiveness to go along with the ability to make plays."

Ahlers threw for 498 yards and a school-record six touchdowns a week after setting an ECU mark with 535 yards passing when the Pirates lost to No. 17 Cincinnati 46-43 on a field goal on the final play.

East Carolina: When his first season is over, Houston could easily point to this two-week stretch as the most significant progress for a program with a 4-26 conference record going back to 2016. The Pirates performed well against consecutive Top 25 opponents.

SMU: Defense is an issue for the Mustangs, who have allowed at least 500 yards four times in five games after posting mostly respectable numbers early in the season. "I'm surprised we didn't play better defensively based on the way we practiced, but again, you've got to give East Carolina credit," Dykes said.

Dickerson saw his record for total touchdowns fall on Jones' 64-yard touchdown late in the third quarter, and Dykes didn't know until about the milestone until after the game. "I wish I'd have known that," Dykes said. "I saw Eric in the locker room. I would have given him a hard time about that." Jones became the sixth SMU back with multiple 1,000-yard seasons (1,063).

It's been quite a two-week run for both quarterbacks. Ahlers, who was 32 of 42 without an interception, has 1,033 yards passing in two games. Buechele is at 870 after throwing for 456 against Memphis. Buechele was 33 of 46 with one interception.

Both teams are off next weekend before playing their final road games Nov. 23. East Carolina goes to UConn, and SMU will be at No. 25 Navy.

By John Zenor 31 minutes ago
By Pete Iacobelli 59 minutes ago
an hour ago
By Ralph D. Russo 4 hrs ago
By Ken Powtak 18 hrs ago