No. 23 SMU visits Memphis, aims to bounce back from 1st loss 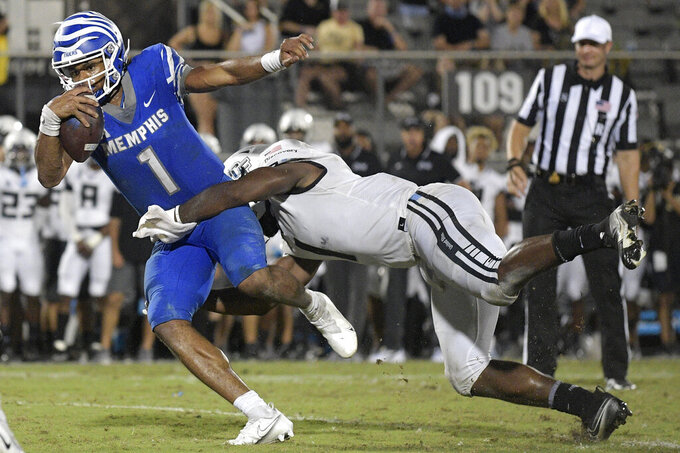 Coach Sonny Dykes believes his No. 23 SMU Mustangs are still in a good spot with plenty of time to rebound from their first loss and win the American Athletic Conference championship.

That doesn't change the fact he wishes his Mustangs hadn’t kicked directly to a dangerous returner who went 100 yards for a touchdown with 17 seconds to stun SMU.

But it's still just one loss.

“That’s the only thing anybody in our program is concerned about right now is doing everything we can to play as well as we can every single time we take the field ...,” Dykes said. " And so we know none of this is easy. But I think our players are looking forward to the challenge and excited about it.”

The Mustangs might be coming off a painful 44-37 loss to Houston last weekend, but the Tigers are looking back to 2018 when they rebounded from a similar 4-4 start to reach the conference championship as the West Division champs. Memphis has had a week off since a 24-7 road loss at UCF with the backup quarterback.

“Our guys don’t need any more motivation,” Silverfield said. “They don’t need any rah-rah speeches. We’ve talked about it. They know the reality of it.”

Dykes has both the top offense in the American thanks to ?? quarterback Tanner Mordecai. The Mustangs are scoring 42 points a game and averaging 504.1 yards per game, and Mordecai is the big reason why. He is second nationally with 32 TD passes, and he's responsible for an average of 25.5 points a game.

Mordecai has thrown for at least 300 yards in seven games this season with at least four TD passes in five games. He's two TD passes from topping the SMU record set by Shane Buechele in 2019, and Mordecai also has 14 more TDs than the next closest quarterback in the league.

Memphis had to start sophomore Peter Parrish in the last game with freshman Seth Henigan sidelined by an injury to his right, throwing shoulder. Parrish was sacked six times in the loss to UCF, and Silverfield says he's had more time to prepare if he has to start Saturday.

Whether Henigan plays likely will be a game-time decision. Henigan is 11th nationally averaging 307.6 yards per game and 22nd with 16 TD passes.

They also have plenty of depth with five others who have started at least one game against FBS competition. The Mustangs rank fourth in FBS giving up 0.75 sacks and are a big reason why SMU ranks in the Top 10 for passing offense, scoring and total offense over a year ago.

No matter who starts at quarterback for Memphis, the Tigers still have the conference's leading receiver. Calvin Austin III is sixth nationally with 112.6 yards receiving per game, and he already has 901 yards receiving this season after leading Memphis with 63 catches for 1,052 yards last season.

SMU has its own top receiver back for this game. Reggie Roberson Jr. had a season-ending knee injury late in the third quarter of the Mustangs' last game against Memphis on Oct. 3, 2020. Roberson had five catches for a season-high 243 yards receiving with two TDs before hurting his knee.

He has 35 catches for 464 yards with five TDs this season.