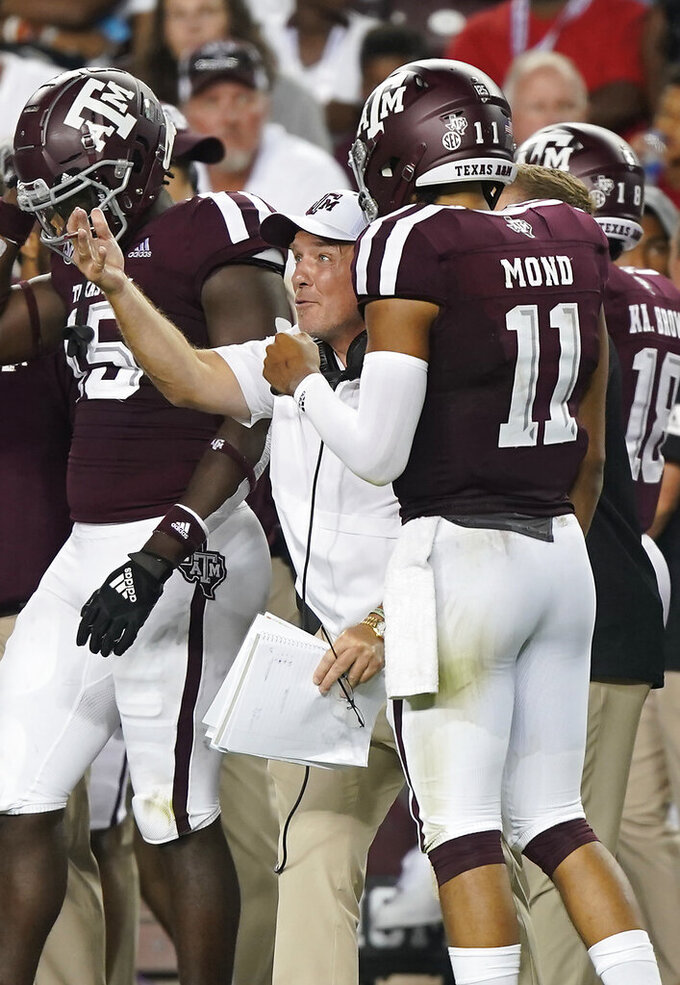 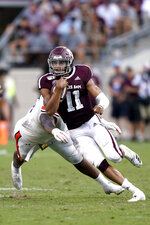 ARLINGTON, Texas (AP) — While No. 23 Texas A&M and Arkansas both have 2-2 records and lost their SEC openers, the programs are in entirely different places under their second-year coaches.

The Razorbacks have lost their last 12 SEC games, and 16 of 17 overall. They are coming off a home loss to San Jose State that coach Chad Morris called "unacceptable" —the Spartans from the Mountain West had dropped 24 consecutive games against power conference teams since 2006.

"You gotta be process oriented. That's part of our program," Aggies coach Jimbo Fisher. "Whether you all believe that or not, it does get frustrating and I understand for fans and everybody else. But as players, we have to understand why the results are there."

When the former Southwest Conference rivals meet as SEC foes for the eighth time Saturday, Texas A&M is heavily favored to beat the Razorbacks for the eighth year in a row.

"Take the previous games out of play, this is a big game for both teams," said Morris, a 1992 Texas A&M grad with a degree in mathematics who did not play football there. "These are two teams back against the wall, and I think you're going to see the best of both."

Fisher's SEC first victory was 24-17 over Arkansas last season. The Aggies went into that game with the same record as now (2-2, 0-1 SEC), the losses then to Alabama and Clemson — the teams that have split the last four national championships. A&M went on to win nine games overall, capped by a 52-13 bowl win over North Carolina State.

This will be the 76th meeting between the Razorbacks and Aggies, and ninth in the home of the NFL's Dallas Cowboys.

Nick Starkel has back-to-back 300-yard passing games with three TDs in each game since taking over as Arkansas' starting quarterback, though he threw five interceptions against San Jose State.

Starkel transferred to Arkansas after graduating from Texas A&M during the summer. He set Aggies bowl records when he completed 42 of 63 passes for 499 yards with four touchdowns in a 55-52 loss to Wake Forest in the 2017 Belk Bowl. But in Fisher's first season in College Station last year, Starkel was Kellen Mond's backup quarterback.

Ben Hicks, another transfer who had previously played for Morris at SMU, started the first the Razorbacks' first two games before Starkel took over as starter.

"I've always said that Nick's a very good player, a great young man. I don't know much about their quarterback situation, but doesn't surprise me," Fisher said. "He's a very talented guy that could play a lot of places in this country and, like I said was a very good player here."

Mond is 16-9 as Texas A&M's quarterback, and is one shy of becoming the eighth Aggie with 40 career touchdown passes. He needs only 109 rushing yards to join Johnny Manziel, Reggie McNeal and Stephen McGee as the only players in school history with 5,000 yards passing and 1,000 yards rushing.

In both losses this season, the Aggies had only three points through three quarters. They scored 17 points in the fourth quarter against Auburn last week.

"I think you've got to relax and make the plays. There's opportunities and there's plays to be made," Fisher said. "Whether it's a missed throw, a drop, a missed block, you just got to execute, and sometimes I mean this, sometimes you try too hard. You press yourself into perfection and you can't."

The Dallas Cowboys are owned by Jerry Jones, who was a captain for Arkansas' 1964 undefeated team. Jones' alma mater beat Texas A&M at AT&T Stadium the first three years that the series was played there from 2009-11. After a game on each campus, the series returned to the showplace stadium in 2014, and the annual matchup is set to continue there through at least 2024.