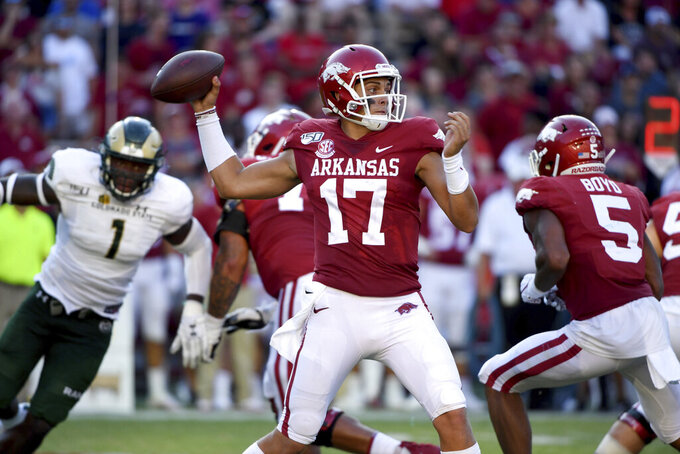 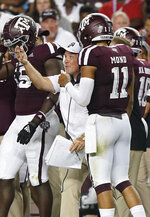 The Aggies, whose losses are at No. 1 Clemson and to No. 7 Auburn, look to win their eighth consecutive game over Arkansas since the former Southwest Conference rivals reunited in the SEC. Both teams are trying to avoid 0-2 starts in conference play. The Razorbacks have lost their last 12 SEC games, and 16 of 17.

Arkansas QB Nick Starkel vs. his former team. The grad transfer from Texas A&M has back-to-back 300-yard passing games with three TDs in each game since taking over as the Razorbacks starter. But he did have five interceptions in last week's 31-24 loss to San Jose State, which was a 20-point underdog that hadn't been a major conference team since 2006. While coach Jimbo Fisher said Starkel was a "very good player" with the Aggies, junior Kellen Mond is 16-9 as their starter.

Arkansas: Junior RB Rakeem Boyd has 394 yards rushing and three TDs. He didn't play as a freshman at Texas A&M in 2016 before going to Independence Community College and then was the Razorbacks' leading rusher last season.

This will be the sixth consecutive meeting at the home stadium of the NFL's Dallas Cowboys, whose owner Jerry Jones was co-captain of Arkansas' undefeated 1964 team. ... The Aggies won 24-17 last year, after three of the previous four games in the series went to overtime. ... The Razorbacks have eight turnovers (six interceptions, two fumbles) this season. They also have eight takeaways (four interceptions, four fumbles). ... Second-year Arkansas coach Chad Morris is a 1992 graduate of Texas A&M, where he got a mathematics degree and didn't play football.