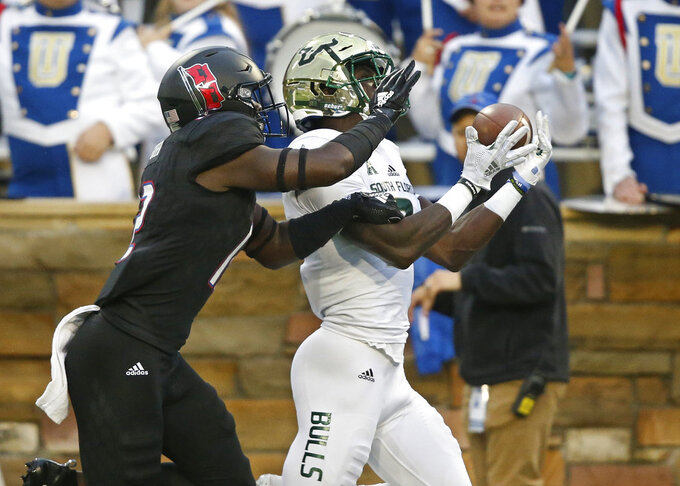 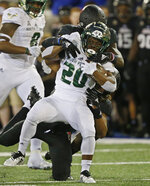 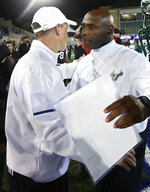 TULSA, Okla. (AP) — Blake Barnett and Tyre McCants came through with No. 23 South Florida's undefeated season on the line against struggling Tulsa.

The Bulls overcame a 14-point deficit in the final 7:10, taking the lead on Coby Weiss' 22-yard field goal with 2 seconds left in a 25-24 victory Friday night.

Barnett and McCants set up the field goal, with Tyre McCants taking the ball to 5 with 8 seconds left on a 32-yard pass play.

"The thing about him is that he is so strong and he is elusive," USF coach Charlie Strong said about the 5-foot-11, 240-pound McCants. "When you tackle him you'd better wrap up because he's going to break away."

USF was helped on the drive by a roughing-the-passer penalty on defensive end Trevis Gipson.

"I haven't seen the play. And I've got to be real careful what I say," Tulsa coach Philip Montgomery said. "All I do know is that is a tough call right there in in that situation at that time in the game."

"It was great that we were able to pull this game out when we have a national audience when a lot of people were able to see us," Strong said.

Weiss won the kicking job just before the season started.

"I told our guys, we didn't know who our kicker was, but we know he is now," Strong said.

Jordan Cronkrite, who set a USF and AAC record with 302 yards last week at UMass, rushed for 151 yards on 25 carries. But outside of a 66-yard touchdown run early in the third quarter that evened it at 10, Cronkrite didn't do a lot of damage.

Sharmari Brooks ran for 100 yards on 28 carries for Tulsa. He had two 10-yard scoring runs in the third quarter to put the Golden Hurricane up 24-10.

Tulsa almost won the game due to not turning the ball over, combined with a strong defense. Coming into the game, Tulsa ranked last in FBS in turnovers and turnovers per game, and sixth-to-last in turnover margin.

South Florida would have almost certainly dropped out of the Top 25 after losing to a Tulsa team that had not won a FBS game all season.