No. 23 Utah looks to avoid letdown at improving UCLA 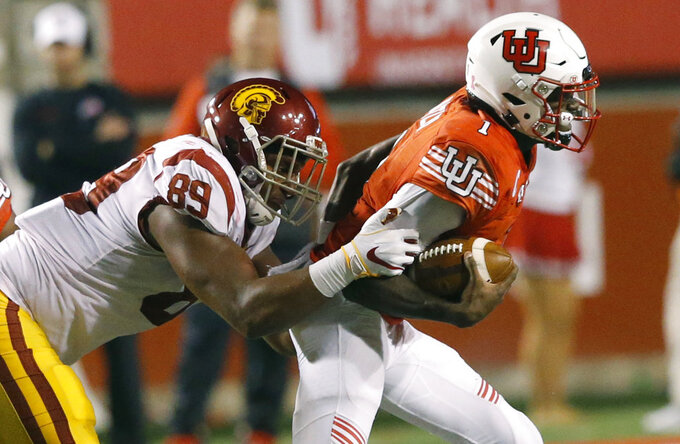 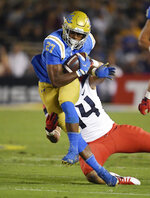 LOS ANGELES (AP) — Utah is the only team in the Pac-12 South that has not played in the conference title game.

The No. 23 Utes believe this is their year to finally break through and hope to prove it against surging UCLA on Friday night.

"Right now, we have a little momentum on our side," Utah coach Kyle Whittingham said.

Utah (5-2, 3-2 Pac-12) has had chances to win the division in previous seasons, but results like their comprehensive 41-20 win over Southern California last week have usually been followed up by shock losses to teams like UCLA (2-5, 2-2). Home victories over the Trojans in 2014 and 2016 were immediately negated by road losses at Arizona State and California.

With the Bruins finally figuring things out under first-year coach Chip Kelly, one less day to prepare, and little margin for error in a crowded division race, Whittingham is demanding that the same consistency that has propelled Utah to three straight wins continue this week.

"You can't look past anyone in this conference," Whittingham said. "Our guys do a great job of not looking past any team. So, I couldn't even tell you who we play next week. We have all of our focus, all of our attention, everything is centered on the Bruins."

A similar emphasis on process has carried UCLA to consecutive wins over the Golden Bears and Arizona.

"To be honest, I think guys are excited to win, but I don't think we make one week bigger than the next. I think everybody is focused on one week at a time and being 1-0 during that certain week," UCLA tight end Caleb Wilson said. "Even during the losses, I liked how our team has responded each week. I've seen guys just focus on the small things during practice and it's starting to show by us getting some wins."

UCLA is dealing with uncertainty at quarterback as freshman Dorian Thompson-Robinson sustained an apparent shoulder injury against the Wildcats and was replaced by Michigan graduate transfer Wilton Speight, who was 17 of 27 passing for 204 yards and two touchdowns in the 31-30 comeback win.

Thompson-Robinson increased his workload during the week, but Speight worked with the first unit during the portion of practice open to the media.

Here are some other things to watch when the Utes try to get their third straight win over the Bruins at the Rose Bowl:

HERE'S HUNTLEY: Consistent quarterback play has been lacking for Utah since joining the Pac-12 in 2011, but junior Tyler Huntley has been both steady and superb during the Utes' three-game winning streak. Huntley has completed 77 percent of his passes for 741 yards, seven touchdowns and one interception in that span, adding 120 yards rushing and two touchdowns and a 58-yard touchdown reception.

CRUISING KELLEY: It took some time for UCLA running back Joshua Kelley to figure out where he fit in Kelly's spread offense. Over the past four games, however, Kelley has rushed for 542 yards and five touchdowns. The redshirt junior who started his college career at UC Davis is the first Bruins running back with four straight 100-yard games since Tyler Ebell had six in a row in 2002. Kelley will try to continue that streak against a Utah defense allowing 74.5 yards rushing per game and 2.39 yards per carry, leading the Pac-12 in both categories.

RANK VS. RANKED: UCLA has lost eight consecutive games against ranked opposition, including defeats by No. 8 Oklahoma and No. 15 Washington this season. The Bruins' last win over a ranked team was a 17-9 win at No. 18 Utah in 2015, and their last victory over a ranked team at home came against No. 20 Cal earlier that same season.

SACK ATTACK: Led by defensive end Bradlee Anae's five sacks, Utah ranks second in the Pac-12 in bringing down the quarterback. Variety has helped the Utes pile up those 20 sacks, as 11 different defenders have at least one sack this season. UCLA, meanwhile, has 12 sacks and continues to struggle in generating pressure.

QUICK KICKS: While Kelly fielded strong special teams during his four seasons at Oregon, the Ducks often struggled at placekicker. That hasn't been the case at UCLA as Kelly inherited junior J.J. Molson, who has made nine of 10 field goals this season and six of seven longer than 40 yards. With 209 career points, Molson trails Heisman Trophy-winning quarterback Gary Beban for 12th place in UCLA history by five points. Utah senior Matt Gay has picked up where he left off after winning the Lou Groza Award in 2017, making all six field goals inside of 40 yards and 10 of 13 overall.