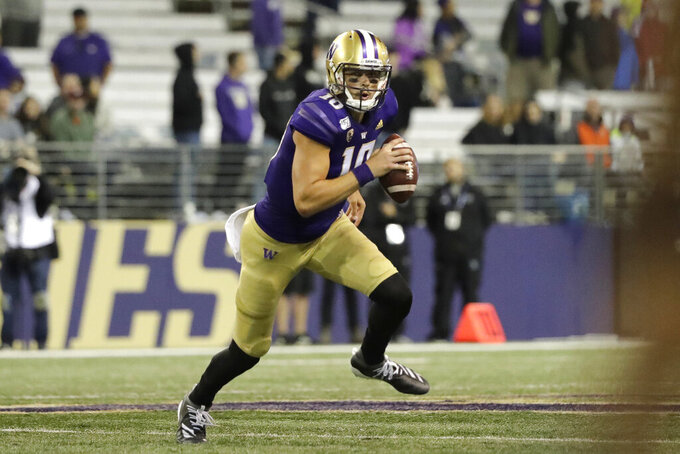 Washington looks to rebound after last week's 20-19 home loss to California against the school already with two wins against the Pac-12. Hawaii opened the season with back-to-back home wins over Arizona and Oregon State, but ventures away from the islands for the first time. Hawaii plays three of its next four on the road.

Hawaii's offensive line vs. Washington's pass rush. It's no secret the Warriors are going to fling the ball all around Husky Stadium. Giving QB Cole McDonald time to find his talented array of receivers is critical especially with the talent in Washington's secondary. The Huskies have seven sacks through two games led by Benning Potoa'e with two, while the Warriors have allowed only four.

Hawaii: WR JoJo Ward. He was named Mountain West offensive player of the week after catching 10 passes for 189 yards and four touchdowns in the win over Oregon State. The four TD receptions matched a school record. Ward was targeted 13 times in the victory.

Washington: DB Myles Bryant. Expect the senior to have a busy day trying to contain Hawaii's pass game. Bryant and the Huskies defense have yet to force a turnover through two games. Last year, the Huskies had only one turnover after two games but forced three in a Week 3 win.

Washington's game last week was delayed more than 2 ½ hours due to severe storms and finished at 1:22 a.m. on Sunday. ... Third time in school history Hawaii is facing three Pac-12 programs in the same season. ... Washington plays its first road game next week at BYU. ... Hawaii is 1-16 against ranked teams on the road with the only win in 2008 at Fresno State. The Warriors have lost 10 straight overall vs. ranked teams.