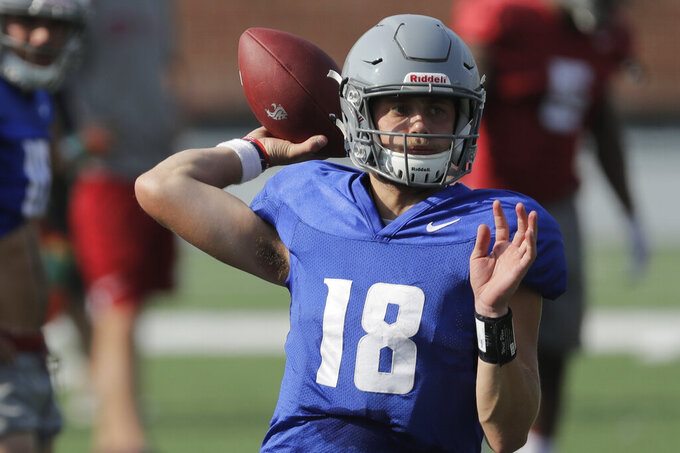 Anthony Gordon has barely seen the field in three seasons at Washington State but the Cougars are his team now.

Gordon emerged as the starter from fall camp and will be under center Saturday when No. 23 Washington State opens the season against New Mexico State.

"He had a really good spring and then he really didn't break stride from spring to fall camp. He was very steady in camp," coach Mike Leach said. "Steady, but also explosive."

Gordon, a senior, played one year at City College of San Francisco, throwing for 3,800 yards and 37 touchdowns. He has completed just three of five passes for 17 yards with one interception at Washington State, but he's expected to produce in the Air Raid offense.

He's already made a mark by topping Gubrud, a former Eastern Washington starter who has thrown for 9,900 yards and 86 touchdowns in his career but was less consistent in camp.

New Mexico State is led by sophomore quarterback Josh Adkins, who threw for 2,563 yards and 13 touchdowns last season. The Aggies are trying to rebound from a 3-9 season during which they only beat one FBS opponent.

Other things to know heading into Saturday's game in Pullman:

Washington State is looking to improve on its 2-5 record in season openers under Leach and help set the stage for an unprecedented fifth consecutive bowl game appearance. The Cougars lost their first five openers under Leach, including twice to FCS teams, but have won the last two. New Mexico State has not won an opener since 2014.

Gordon will have plenty of help in his first season leading the Air Raid. The Cougars have a deep corps of returning wide receivers, including Tay Martin, Easop Winston Jr. and Dezmon Patmon, and typically play eight deep. Also back is sophomore running back Max Borghi, who caught 53 passes last season.

One secret to Washington State's success last year was that the Cougars cut back on the number of plays that got negative yardage. They had 57 negative plays last year, compared to 87 the year before.