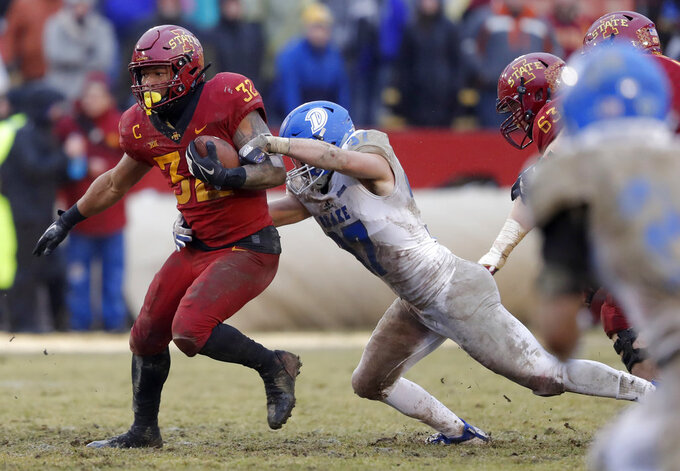 That decision nearly resulted in the most embarrassing loss in school history.

David Montgomery ran for 145 yards and two touchdowns and No. 24 Iowa State survived a near-upset by the non-scholarship Bulldogs on Saturday, winning 27-24.

Brock Purdy had 153 yards passing and a TD and ran for another score for the Cyclones (8-4), who fought through persistent rain and a muddy, torn-up field for their seventh win in eight games.

It hardly felt like a victory, though, against a team that agreed to play this makeup game only two weeks ago, and Iowa State coach Matt Campbell blamed the close call on execution instead of effort.

"I don't know that we played with great detail on a surface like that, where every inch matters," Campbell said.

Iowa State's opener against South Dakota State was canceled (lightning) and the Jackrabbits' replacement, Incarnate Word, backed out after reaching the FCS playoffs.

The Bulldogs, buoyed by conditions that made footing more important than formations, forced turnovers on back-to-back possessions to open the second half. They turned the second one, a pick of Kyle Kempt, into a 19-yard TD pass from Grant Kraemer to Devin Cates and a stunning 24-20 lead with 3:37 left in the third quarter.

That finally woke the Cyclones up.

They responded with a 7-yard touchdown reception by Deshaunte Jones to jump back on top, and Spencer Benton and JaQuan Bailey came up with huge fourth-quarter sacks to force Drake punts.

Montgomery's 2-yard run on a 3rd-down-and-1 with 1:26 left sealed it for the relieved Cyclones.

"Sometimes people outside of our program define us because we're non-scholarship," Drake coach Rick Fox said. "I think you saw the kind of guys, the kind of athletes, the kind of competitors we have."

Iowa State: The Cyclones have long prided themselves on having one of the nation's best grass gridirons. But seven home games and a morning filled with sleet, snow and rain — at times, all happening at once — literally leveled the playing field. It was so muddy that Iowa State's band wasn't allowed to perform at halftime. Still, the Cyclones looked uninspired at best — and it might have made them less desirable when bowls make their picks on Sunday. "If it does, so be it. All we can be is us," Campbell said.

Drake: The Bulldogs made the most of their moment on a big stage, and Fox should be applauded for having his guys ready to go on short notice. To blame this loss all on Iowa State would be unfair, because the Bulldogs looked the part from the opening whistle. "Watching their film, we kind of knew where the open holes were going to be," Kraemer said.

It's hard to believe Iowa State is one of the 25 best teams in America after that debacle.

Drake opened the scoring with a 7-yard TD pass from Kraemer to Zach DeLeon and had the game tied up at 14-all early in the second quarter after a 10-play, 83-yard touchdown drive. Iowa State appeared set to begin pulling away after Purdy's 11-yard TD run made it a 20-14 game at halftime — but the slippery conditions caused Purdy to fumble deep in Iowa State territory early in the third quarter, leading to a Drake field goal. Kempt then threw a pick because of a bad read, not a wet football, and the Bulldogs drove 54 yards to take the lead. "The field, it was awful," Iowa State receiver Hakeeem Butler said.