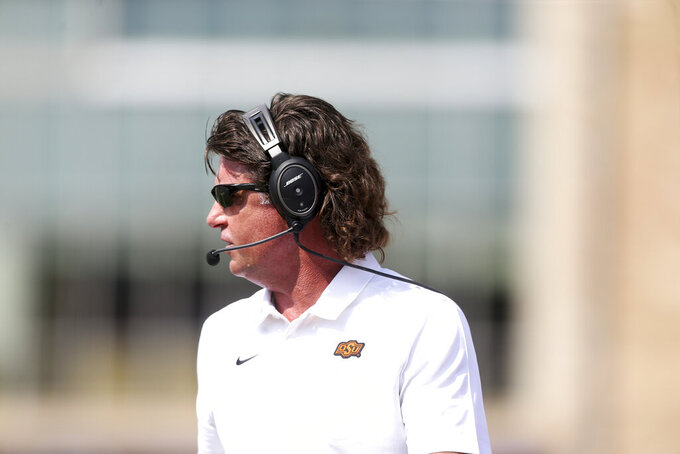 STILLWATER, Okla. (AP) — Coming off of its bye week, No. 24 Kansas State goes on the road Saturday to play Oklahoma State in what will be new head coach Chris Klieman's first Big 12 matchup.

The Wildcats improved to 3-0 with a 31-24 come-from-behind victory over Mississippi State on Sept. 14. The week off was a help.

"It was good for us from a staff's point of view to evaluate where we are, what we feel we can do with the group of guys we have," said Klieman, who won four FCS national championships in five years at North Dakota State before replacing Bill Snyder in December. "Where do we see our strengths, where do we see our weaknesses? (We) try to work on all those weaknesses, emphasize the strengths. We try to see where we're thin at positionally. This is only going to be game four, but we're still pretty new with our program."

For Oklahoma State (3-1, 0-1 Big 12), coming off a disappointing 36-30 loss at No. 11 Texas last week, the goal is just to get back to work against another strong conference opponent.

Coach Mike Gundy's team ranks 11th in the nation in total offense (533.8 yards per game) and 12th in scoring (44.5 points per game), but faces a challenge. The K-State defense is ninth in the country in total defense, allowing just 256 yards and 12.7 points per game (which is 13th).

"We're playing a good football team this week," Gundy said. "The defense has played really well. The defense is pressure, lot of man-coverage and blitzing style, so we'll have our work cut out for us."

First-year Oklahoma State offensive line coach Charlie Dickey spent the previous 10 seasons at K-State and knows the Wildcats' linemen well, but neither team believes that gives the Cowboys much of an advantage.

"Charlie's got his hands full trying to get our guys lined up," Gundy said. "We have so much video now . I think you can get more out of that. I don't know how much that factors into the game."

Klieman agreed: "It's still comes down to who's the better player that you're going across from."

IT IS BETTER TO RECEIVE

Oklahoma State receiver Tylan Wallace entered the week ranking fourth in the nation with 473 receiving yards (on 20 receptions) and tied for second with six receiving touchdowns. That is actually three spots lower than he was last week, when he topped everyone, but after making five catches for 83 yards against Texas, he dropped a bit.

"I will say that I was surprised that they were willing to be that protective of (Wallace)," Gundy said of the Texas defense, "but they sold out in stopping him."

After 10-of-18 passing for 123 yards against Mississippi State, including the game-winning 15-yard touchdown toss to Dalton Schoen with 5:37 remaining, K-State quarterback Skylar Thompson has completed 67.9% of his throws this year. That's fifth in the Big 12 and 30th overall.

Oklahoma State running back Chuba Hubbard not only leads the nation in rushing (642 yards0 and rushing touchdowns (9), but he also has the most carries (103). In the season-opening 52-36 win over Oregon State, he ran 32 times and against Texas, he rushed 37 times, totals that Gundy admitted was more than he was comfortable with.

"That is five more than I thought was too many before," Gundy said of Hubbard's workload last week. "It has been a conversation and we want to keep him healthy. We want him to be fresh but he is clearly the best runner. We do what we think we need to do to score the most points."

Kansas State may not have an individual rusher among the nation's leaders like Hubbard, but the Wildcats rank seventh in the country with an average of 280 yards per game on the ground (OSU is 10th). K-State is led by James Gilbert with 277 yards and three touchdowns on 40 rushes, following by Jordon Brown with 154 yards and three TDs on 20 carries and Harry Trotter with 97 yards and two scores on 24 carries.