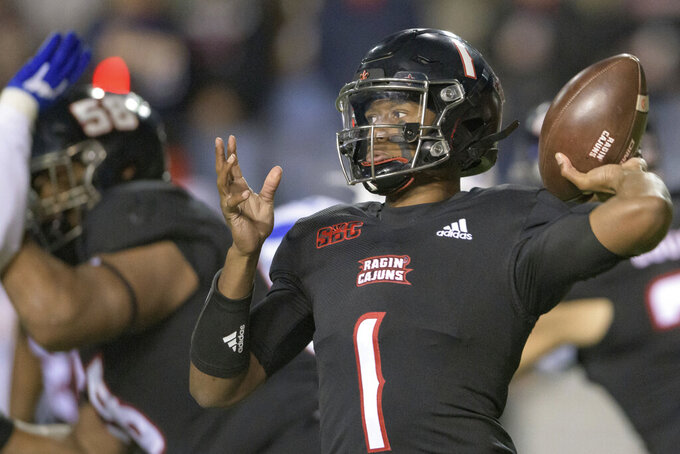 LAFAYETTE, La. (AP) — Montrell Johnson had two fourth-quarter touchdown runs and No. 24 Louisiana-Lafayette scored all its points on its final three possessions to rally for a 21-17 victory over Georgia State on Thursday night.

The Ragin’ Cajuns (8-1, 6-0 Sun Belt) locked up the conference West Division title for the fourth straight season and won their eighth straight game after a season-opening loss at Texas. Louisiana-Lafayette also qualified for the Sun Belt championship game.

Johnson ran for 98 yards, with scoring runs of 3 and 13 yards, the second with 2:32 left to cap a winning 71-yard drive. Louisiana-Lafayette held the Panthers on downs at midfield in the final minute.

“We knew this was going to be tough,” said Louisiana-Lafayette coach Billy Napier, whose team is 14-3 in one-possession games over his four seasons. “We had the five-day turnaround and were trying to clinch the West against a very underrated team. This was a squad that’s won three in a row and they’re highly motivated since they’re still in the East Division race, and all of a sudden we’re in a dogfight.”

The Cajuns were shut out for most of the first three quarters by the two-touchdown-underdog Panthers, who took a 10-0 third-quarter lead on Darren Grainger’s 37-yard scoring pass to tight end Roger Carter.

“We believe in the value of touchdowns in the red zone,” Napier said. “You can kick field goals all you want in the red zone, we did that the first year we were here and it cost us a lot of games. Our guys know that we’re going to be aggressive.”

The Panthers, who had at least three first downs on each of their first-half drives, got a 39-yard field goal from Noel Ruiz, his longest of the year, with 5:05 left in the opening quarter on its first possession.

Both teams squandered scoring chances before Georgia State made it 10-0 midway through the third quarter thanks to the game’s only turnover. Antavious Lane picked off Lewis’ pass at midfield, and Grainger hit tight end Roger Carter with a 37-yard scoring pass three plays later.

Lewis came back to lead a 75-yard drive on Louisiana-Lafayette’s next possession, hitting Peter LeBlanc for a 13-yard score with 2:47 left in the third period. Then, after forcing a short Panthers punt, the Cajuns marched 50 yards in only six plays before Johnson scored from 3 yards out to give Louisiana-Lafayette its first lead at 14-10 with 13:11 left.

Georgia State responded with a 15-play, 75-yard drive, all on the ground, and ate up 7:46 of clock time before Gregg ran for a key fourth-down conversion at the Cajuns 1 and then scored one play later.

Peter LeBlanc, whose best outings this year had been four catches for 43 yards, broke loose for career highs of nine catches and 118 yards, including Louisiana-Lafayette’s first touchdown on a 13-yard catch. Both were high marks for the Cajuns this season.

“Pete was banged up some last year, but we got him healthy now and he made some great plays,” Napier said. “He did a really good job running after the catch.”

“We were sputtering all night on offense,” LeBlanc said, “so it was great to be able to have those chances in the second half.”

Louisiana-Lafayette, which was ranked No. 23 in the preseason poll before the opening loss at Texas, broke back into the poll for the first time this week and will likely stay in the rankings.

Georgia State: The Panthers had a three-game winning streak snapped and need to win two of their last three games to become bowl-eligible for the fourth time in the last five years.

Louisiana-Lafayette: The Ragin’ Cajuns locked up the Sun Belt Conference West Division title, and can host the conference championship game with wins in its last two league games.

Louisiana-Lafayette: At Troy on Nov. 13.