No. 24 Mississippi State leans on its elite defense 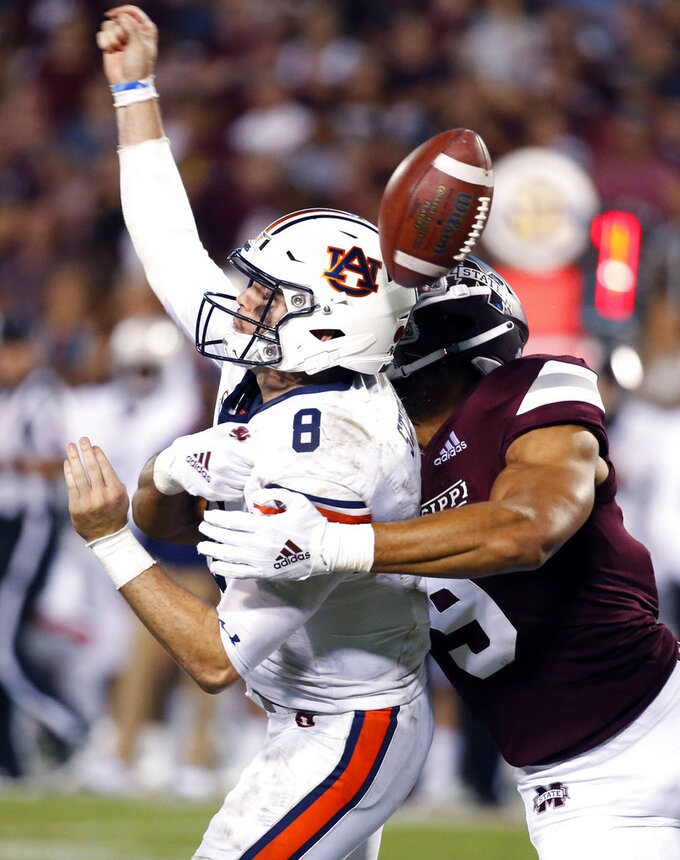 FILE - In this Saturday, Oct. 6, 2018, file photo, Mississippi State defensive end Montez Sweat (9) forces Auburn quarterback Jarrett Stidham (8) to fumble as he attempts to pass during the second half of their NCAA college football game in Starkville, Miss. No. 24 Mississippi State has some problems to fix during its off week, but they're mostly on the offensive end. The Bulldogs' defense has been elite and is giving up just 12.7 points per game, which ranks No. 1 in the country. (AP Photo/Rogelio V. Solis, File)

STARKVILLE, Miss. (AP) — Mississippi State has welcomed its current off week as a chance to rest, regroup and tinker with an offense that's had its ups and downs through the first six games of the season.

The defense has no such worries. It just needs to continue to doing what it has been doing.

The 24th-ranked Bulldogs (4-2, 1-1 Southeastern Conference) have the nation's top defense in the country by at least one important measure — scoring defense. Mississippi State is giving up just 12.7 points per game and has surrendered only seven touchdowns over six games.

"Other than wins and losses, points per game is probably the most important statistic," Mississippi State's first-year defensive coordinator Bob Shoop said. "I think we've got a group of guys out there who take great pride in not letting a team in the end zone."

The breakthrough win highlighted what's made the Bulldogs' defense so tough this season. Auburn was occasionally able to move the ball in the middle of the field, but when the Tigers got to the red zone, Mississippi State clamped down quickly.

Opponents have scored just four touchdowns in 14 red zone trips against the Bulldogs this season.

"We've played good situational football, specifically third down, the red zone and the clock situation," Shoop said. "If you do that, in today's day and age, that's good stuff."

Mississippi State is particularly good along the defensive line, where the combination of senior Montez Sweat and junior Jeffery Simmons has consistently wrecked the opposing team's offensive game plan.

The 6-foot-6, 245-pound Sweat has 10 tackles for a loss this season, including three sacks against Auburn. He's been the SEC's defensive lineman of the week five times in his career, which spans just 19 games since transferring from junior college.

Sweat has been productive off the edge while the 6-foot-4, 300-pound Simmons is a load to handle on the interior and has 8½ tackles for a loss. When both are playing at the same time, the offensive line has its hands full.

"He allows me to get those one-on-ones," Sweat said of Simmons. "They can't double team two people on our defensive line because that's not going to wind up too good."

Mississippi State coach Joe Moorhead said Sweat's presence in practice has helped the offense improve. When there are problems on the offensive line, Sweat can exploit them in a hurry.

"Sometimes it can be a little bit of a pain because you have a hard time getting a pass off, particularly in spring ball early on, but I think iron sharpens iron," Moorhead said.

Mississippi State's off week gives it extra time to prepare for a road trip to LSU on Oct. 20. That starts a difficult stretch for the Bulldogs, who will also play Texas A&M and Alabama over the next four weeks.

Shoop said while his defense has been very good, it's far from perfect. Even though the Bulldogs beat Auburn, there were still some breakdowns in coverage. Auburn botched two great opportunities at touchdowns, one on a dropped pass and another on a fumble at the 1-yard line.

The Bulldogs might not be as fortunate against LSU, which has already earned wins over Auburn and Miami. Mississippi State will have to prove itself all over again.

"I'm quite sure that LSU doesn't really care about our defensive statistics," Shoop said.