No. 24 Pitt looks to stay perfect against N.C. State 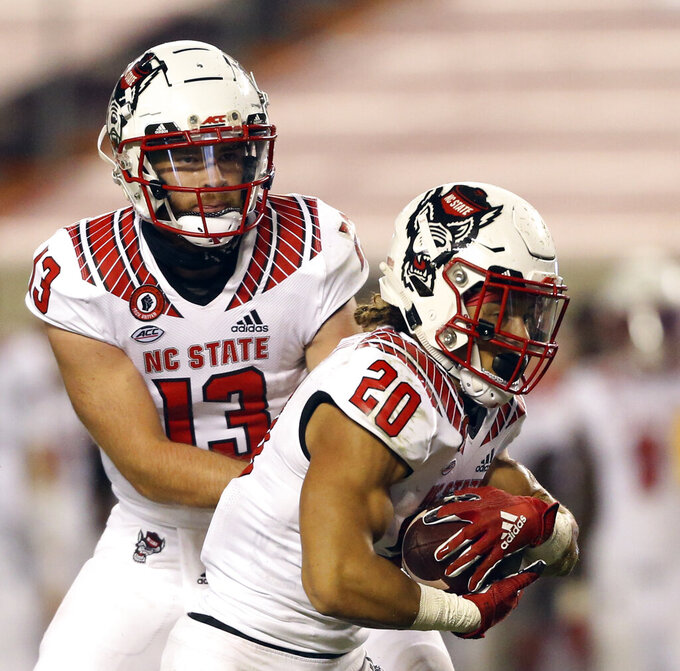 North Carolina State quarterback Devin Leary (13) hands off to running back Jordan Houston (20) for a touchdown run in the second half of an NCAA college football game against Virginia Tech, Saturday, Sept. 26, 2020, in Blacksburg, Va. (Matt Gentry/The Roanoke Times via AP, Pool) 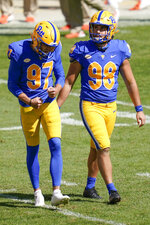 Sure, the 24th-ranked Panthers (3-0, 2-0 Atlantic Coast Conference) are off to their best start in Narduzzi's six seasons on the job. Yes, they're in the top 10 in the country in just about every statistical defensive category, from total defense to rushing defense to points allowed.

That's good, but Narduzzi believes his team has more to offer. He points to the two busted plays that allowed Syracuse and Louisville to score long touchdowns as a result. Take them out and Pitt isn't just a top 10 in defense, but No. 1 with a bullet.

Maybe, but the Panthers haven't given much ahead of a visit by erratic N.C. State (1-1, 1-1) on Saturday. Pitt hasn't started 4-0 since 2000, when the current group of Panthers was still in diapers, if they were even born at all.

The Wolfpack earned a needed ACC victory to start the year, winning a 45-42 shootout with Wake Forest to end a six-game skid dating to last season. But the follow-up performance was a big disappointment, with N.C. State losing 45-24 on the road last weekend against a Virginia Tech team down 23 players and four coaches due to coronavirus issues and injuries.

The defense has been a concern, with the Wolfpack last in the ACC and 67th out of 72 teams in the Bowl Subdivision ranks to have played by allowing 43.5 points.

It didn’t help last week that linebacker Payton Wilson, safety Tanner Ingle and cornerback Teshaun Smith were out with injuries. Coach Dave Doeren said the team expects Wilson back and is “hopeful” about Ingle, though Smith is out for the year with a shoulder injury.

“It’s obviously an opportunity with this football team to learn … and grow from an experience that obviously we don’t want to relive,” Doeren said of the loss to the Hokies. “And we’ll do that. These are experienced coaches. They’re great young men, they’re prideful young men. They care a lot about each other and this university, and we all hate losing.”

N.C. State’s quarterback situation has gone from looking settled in the preseason to anything but.

Devin Leary was expected to be the starter before he had to quarantine for roughly 20 days and missed practice reps, leading Bailey Hockman to start the first two games. But Hockman struggled against Virginia Tech, with Leary coming on in relief to throw for 165 yards on 12-for-16 passing with a touchdown.

Doeren wouldn’t publicly commit to a starter earlier this week.

“They’re both going to get reps this week and we’ll see who’s the most ready to lead our team this weekend,” Doeren said.

Pitt place-kicker Alex Kessman went 0 for 3 on field-goal attempts against the Orange. He bounced back by going 3 for 3 — all from 41 yards out or longer — against Louisville. Kessman attributed a meeting with a sports psychologist for fueling the turnaround.

Still, Narduzzi would prefer Kessman to stay on the sideline more or simply come out to kick extra points.

“As much as I’m happy for Kessman, if he sits on the sideline and kicks into a net all day I’ll be excited for him,” Narduzzi said. “He can just kick in the net. He’s never missed one in the net yet.”

One of the issues for Pitt this season has been finishing drives. The Panthers have scored touchdowns on 9 of 13 drives inside the red zone, issues that have made their games closer on the scoreboard than they were on the field.

Sophomore running back Zonovan “Bam” Knight and junior Ricky Person Jr. have helped the Wolfpack average 204.5 yards on the ground to rank fifth in the 15-team ACC.

Knight is also more involved in the passing game. He has three catches for 30 yards in the first two games after having just seven catches in 12 games last year.

“Last year I just came in from high school, from a school that didn’t really throw as much,” Knight said. “So the biggest thing this offseason for me was getting my hands right.”

Pitt sat seven players for its season opener against Austin Peay due to COVID-19 protocols. Then three the next week against Syracuse. Last week? Zero. Still, Narduzzi isn't ready to do a victory lap.

“Just constantly staying on them and reminding them that we’re not out of the woods yet,” Narduzzi said. “We could go from zero to having 17 of them in quarantine this week. That’s what it is. I think that’s kind of what everybody needs to realize, is just because we’re good right now doesn’t mean you’re going to be good in the future.”