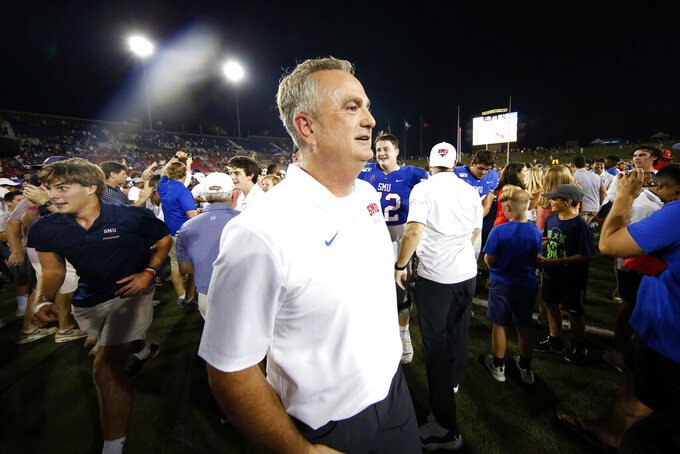 DALLAS (AP) — Not since the Pony Express days with Eric Dickerson and Craig James has SMU been undefeated this deep into a season.

Ranked for the first time in 33 years, the No. 24 Mustangs overcame a three-touchdown deficit in the fourth quarter, converted six fourth downs and finally beat Tulsa 43-37 when Shane Buechele threw a 25-yard touchdown to James Proche in the third overtime Saturday night.

"For us to go down 21 and just for them to keep playing, hang in there and figure out a way to win the game, it's a real credit to their character," second year SMU coach Sonny Dykes said.

"We knew we were a second-half team" said Proche, who had 11 catches for 153 yards and two TDs. "I don't think it was anything with Tulsa's defense. We just stayed the course and played SMU football."

SMU (6-0, 2-0 American) this week moved into the AP poll for the first time since October 1986, before NCAA sanctions that included the death penalty. The Mustangs didn't field a team in 1987 and 1988.

Tulsa (2-3, 0-1) had the ball to start the third overtime, and used a different kicker after failing to get a first down. But Zack Long was wide left on a 42-yard attempt.

"A tough game to come out on the wrong side of," Tulsa coach Philip Montgomery said. "I thought our guys played extremely hard. I thought they emptied their tanks, didn't leave anything out there."

Jones had a 4-yard TD run on a fourth-down play with 1:02 left in regulation. His 3-yard score after a 15-yard pass on fourth down forced the second overtime after Zach Smith's fourth touchdown pass, a 7-yarder to Josh Johnson, opened the overtime scoring.

"A team that's been playing extremely well. We know that they can catch fire and do some things," Montgomery said. "I think it helped them a little bit in the fourth quarter being down, because every possession is crucial, so they're really playing four-down territory all of the way through it. ... One stop here or there and we're off the field and it could be a different story."

Buechele, the former Texas quarterback, finished 23-of-40 passing for 280 yards and the two TDs to Proche.

Smith was 23 of 41 for 346 yards, but also threw three interceptions before halftime. The first was returned 64 yards by Ar'mani Johnson for a touchdown in the first quarter.

Ke'Mon Freeman had a 1-yard scoring run for SMU on the first play of the fourth quarter, capping a 19-play drive with two fourth-down conversions, one near midfield on a run and the other a pass interference penalty in the end zone on fourth-and-goal from the 1. Buechele threw a 30-yard TD to Proche with 8:24 left, two plays after the quarterback's 3-yard keeper on fourth-and-1.

Tulsa had a 16-6 lead early in the second quarter after scoring two touchdowns with only one second ticking off the clock. Smith threw the first of his two TDs to a wide-open Keylon Stokes for a 58-yard catch-and-run. On the ensuing kickoff, SMU didn't secure the loose ball and Kendarin Ray dove on it in the front corner of the end zone for another touchdown.

Tulsa: The Golden Hurricane will bemoan the mistakes that cost them a chance for the upset on the road, considering the 23-9 halftime lead despite the three interceptions and the missed field goal that would have ended the game in the second overtime. They have lost 17 in a row to Top 25 teams since a 62-35 over No. 24 Hawaii in the Hawaii Bowl on Christmas Eve nine years ago. Tulsa won the regular-season finale at home against SMU last November to keep the Mustangs from getting bowl eligible in coach Sonny Dykes' first season.

SMU: This matched the second largest comeback in school history, the largest being a win at Baylor in 1975 after being down 25 points. ... The Mustangs have scored at least 41 points in their last five games. While they needed two overtime touchdowns to do that against Tulsa, they clearly have plenty of offense with AAC passing leader Buechele, rushing leader Jones and two of the top receivers in Proche and Reggie Roberson Jr.

Tulsa is home next Saturday night to play Navy (2-2, 1-1), which is coming off a home loss to Air Force.