No. 24 SMU tries to stay unbeaten against improving Navy 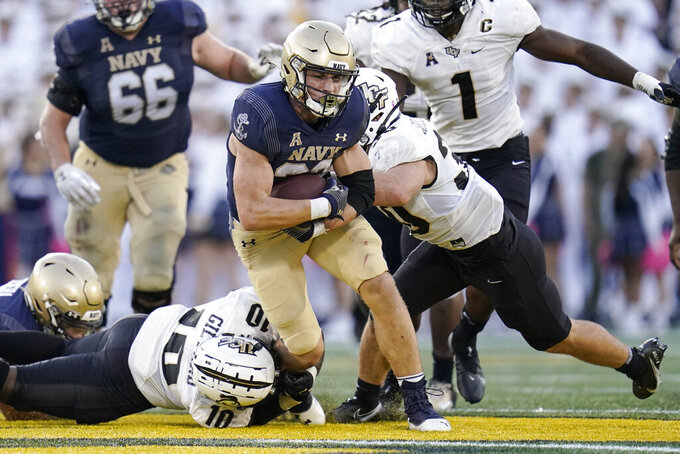 Navy fullback Isaac Ruoss, center, runs with the ball as UCF linebacker Eriq Gilyard (10) and linebacker Bryson Armstrong (30) try to bring him down during the second half of an NCAA college football game, Saturday, Oct. 2, 2021, in Annapolis, Md. Navy won 34-30. (AP Photo/Julio Cortez)

SMU has won its first five games for a third straight season and is now in the Top 25. The Mustangs face a Navy team that was a bit of a mess at the start of the season but has now rebounded nicely. The Midshipmen beat Central Florida last week.

Navy's running game against SMU's defensive front. This is always the question when the Midshipmen play: How well can the other team defend the option? UCF allowed 348 yards rushing against Navy and lost 34-30. The Midshipmen had the ball for nearly 40 minutes in that game.

Navy: Cornerback Michael McMorris has already forced three fumbles this year, and he blocked a punt that Navy recovered for a touchdown against UCF. The Midshipmen may need some takeaways to help contain a balanced SMU offense.

SMU started the season 8-0 in 2019 and 5-0 in 2020. This is the first time the Mustangs have won their first five games in three straight years since 1981-83. ... SMU has won two of the last three meetings in this series, but Navy won 11 of the previous 12 before that. ... Mordecai leads the nation with 24 TD passes, and he's already just 10 shy of the school's single-season record, set by Shane Buechele in 2019. ... Navy rallied from a 13-point deficit in the final quarter against UCF, the team's largest fourth-quarter comeback since 2008.