No. 24 South Carolina eager for showdown with No. 3 Georgia 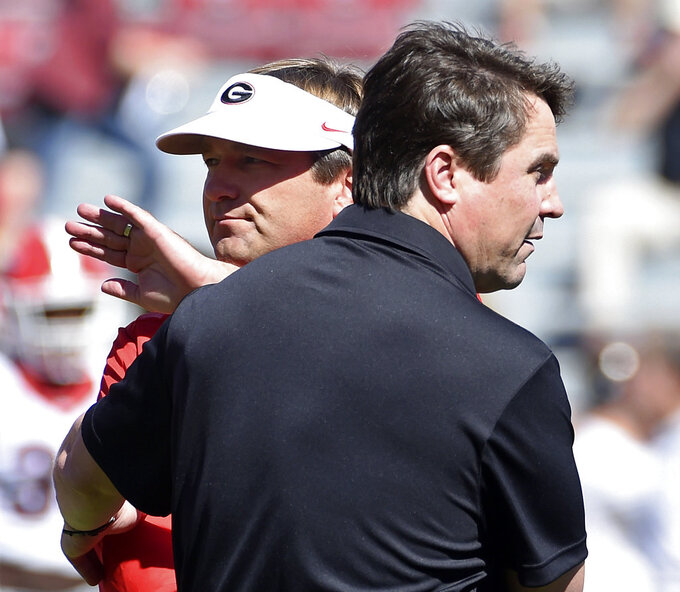 FILE - In this Oct. 9, 2016, file photo, Georgia head coach Kirby Smart, left, and South Carolina head coach Will Muschamp meet on the field before an NCAA college football game in Columbia, S.C. South Carolina has made constant improvement since bottoming out at the end of the Steve Spurrier era. But lose to Georgia on a high stakes SEC opener for both teams and the Gamecocks will likely spend another season in the national shadows. (AP Photo/Rainier Ehrhardt, File)

COLUMBIA, S.C. (AP) — South Carolina quarterback Jake Bentley is excited about his team's new, fast-paced offense. He believes the 24th-ranked Gamecocks will be able to move the ball effectively this week against No. 3 Georgia.

Bentley passed for a career-high four touchdowns in a 49-16 season-opening win over Coastal Carolina of the Sun Belt Conference. The snaps came quickly, as did the points — the Gamecocks scored their most points in a game in five years.
The QB knows that Coastal Carolina is not Georgia.
"You take a lot of good away from Coastal and use that this week," Bentley said Tuesday . "I think the way we were able to move the ball and execute effectively is a positive. Georgia's got a lot of great players so we've got to execute even better and continue to build on what we did last week."
The Gamecocks are back in the Top 25 for the first time since 2014, cracking the rankings on Tuesday. It's a milestone coach Will Muschamp will spend almost no time thinking of or discussing with players.
"If I do discuss it, it will be a solid, 15 seconds of a waste of our time," Muschamp said.
More important to Muschamp is win against Georgia, something he and the Gamecocks have not been able to do recently on a regular basis.
Muschamp is a woeful 1-5 as a head coach against the Bulldogs, the last two of those losses coming as South Carolina coach. The Gamecocks weren't blown out in either defeat — 28-14 in 2016 and 24-14 last year — but their defensive line struggled to contain Georgia's run game and the offense couldn't get going against the Bulldogs' defense.
South Carolina linebacker Bryson Allen-Williams said the Gamecocks have upgraded their personnel and worked to improve their techniques. He knows, too, that toppling Georgia could get those skeptical about the Gamecocks to take another look.
"They competed for the national championship last year," he said. "They've got talented players, just like we have talented players. The biggest thing is just us taking all games the same and not doing what some guys like to do in getting up for certain games."
Bentley completed 22 of 29 passes for 250 and threw touchdowns to four different receivers. One of those, returning playmaker Deebo Samuel, had a stunning, one-handed grab stretching out in the end zone.
Samuel, a senior back from a broken leg that caused him to miss this game a year ago, sees a more polished approach from Bentley and the offense as the tempo has increased. "Everybody has talked about what we need to do to win this game," he said. "And that's what we're going to do."
Muschamp does not want his players cycling up and down through the season, rather building an even-keeled approach where they execute well and don't get caught up in what's ahead.
He understands the winner Saturday has early control of the Southeastern Conference Eastern Division. But no matter, there's a lot of football to be played after Saturday's Top 25 matchup.
Muschamp simply wants the Gamecocks to play with as much efficiency and effort as they did in the opener.

Some at Georgia see a mirror-image of the Bulldogs in the Gamecocks.
"They kind of remind me of our team with the receivers, running backs and smart quarterback that they have," Georgia safety J.R. Reed said.
That's not surprising since both Muschamp and Georgia coach Kirby Smart are friends and cut from a similar Nick Saban coaching tree as his one-time assistants.
"It would be a statement to come out of here and win," Bentley said. "If we're going to do that we've got to prepare the right way first."
___
More AP college football: https://apnews.com/tag/Collegefootball and https://twitter.com/AP_Top25