No. 24 UTSA aims to preserve first ranking at Louisiana Tech 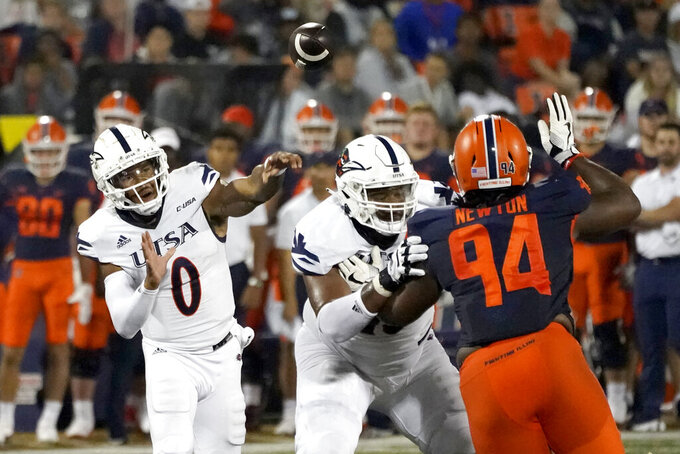 FILE - UTSA quarterback Frank Harris (0) passes during the first half of an NCAA college football game against Illinois in Champaign, Ill., in this Saturday, Sept. 4, 2021, file photo. UTSA is ranked for the first time in program history and will have to beat the sub-.500 Bulldogs to keep it that way. (AP Photo/Charles Rex Arbogast, File)

Line: UTSA by 6 1/2, according to FanDuel Sportsbook.

UTSA is ranked for the first time in program history and will have to beat the sub-.500 Bulldogs to keep it that way. While Tech has dropped three non-conference tilts by a touchdown or less, the Bulldogs are nonetheless in position to try to rally for a Conference USA title. But they must rattle off a series of league victories to do so, starting this week.

UTSA QB Frank Harris and the Roadrunners' offensive line against Louisiana Tech defensive linemen — and brothers — Ben and Levi Bell. The Bell brothers have combined for six of Tech's 10 sacks this season, and they'll be looking to get Harris, who has completed 69.2% of his passes this season, out of his comfort zone.

Louisiana Tech: QB Austin Kendall has thrown for 1,342 yards and 10 touchdowns in five games, but also has been intercepted eight times.