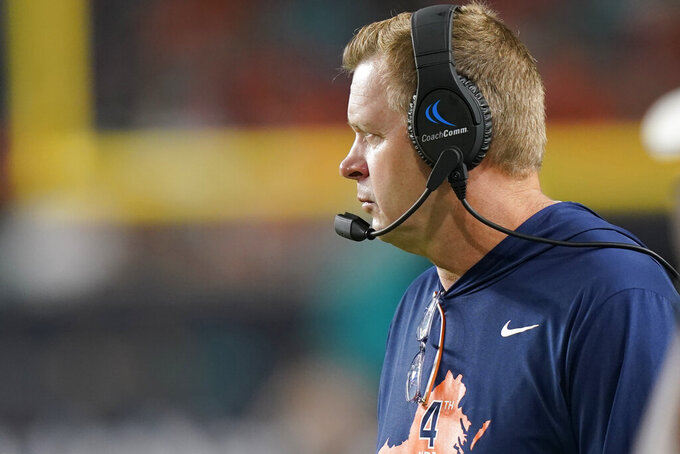 Virginia Cavaliers head coach Bronco Mendenhall watches the game from the sidelines during the second half of a NCAA college football game against Miami, Thursday, Sept. 30, 2021, in Miami Gardens, Fla. (AP Photo/Lynne Sladky)

Line: BYU by 2½, according to FanDuel Sportsbook.

Welcome back Bronco Mendenhall, who faces his former team for the first time since leaving for the Virginia head coaching job in December 2015. He’s obviously got a special place in the heart of faithful BYU fans after helping the team record five 10-win seasons in his 11 seasons. He also led the Cougars to a bowl game each season he was in charge. But loyalty only runs so deep. Coach Kalani Sitake is 44-28 since stepping in for Mendenhall. The 25th-ranked Cougars are 4-1 against Power Five schools this season with wins over Arizona, Utah, Arizona State and Washington State.

Virginia QB Brennan Armstrong has thrown for 23 touchdowns and run for another five. His 3,220 yards passing leads the nation. The Cougars can apply the pressure, though, with 14 sacks and 36 tackles for loss. BYU has held all four of its Pac-12 foes to a combined 17.3 points per game. Baylor scored 38 on a Cougars defense that has eight interceptions.

BYU: DB Malik Moore, who’s No. 7 in the country with three interceptions. It’s his first season as a starter. He had two pass breakups at Washington State in addition to an interception.

The last time Virginia and BYU met was in 2014, when Mendenhall coached the Cougars. ... The average score over the five games between the two looks like this: Virginia 30.8, BYU 30.2. ... Virginia will seek to win five straight games for the first time since 2007. ... The Cavaliers last win on the road against a ranked opponent was in 2011, when they beat No. 23 Florida State 14-13. ... Armstrong already has the second-most yards passing for a single season in team history. ... Virginia also leads the nation in total offense (4,319 yards) and the first downs (221). ... BYU boasts a 14-4 mark under Sitake when ranked.