No. 25 Memphis going for 7th win in row in series vs SMU 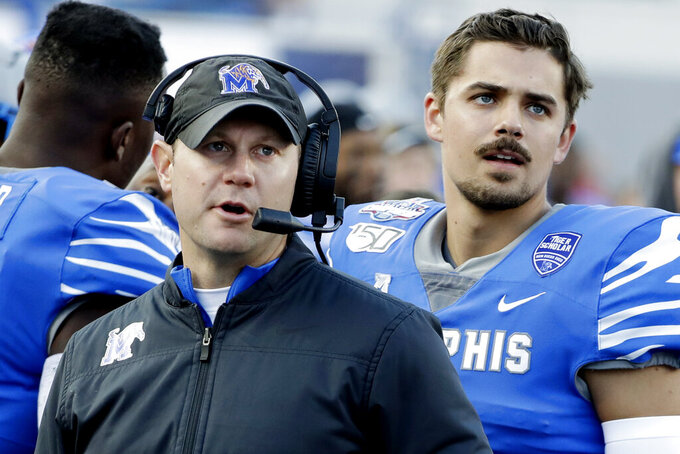 FILE - In this Dec. 7, 2019, file photo, Memphis deputy head coach Ryan Silverfield, left, watches a replay on the scoreboard with quarterback Brady White, right, during an NCAA college football game against Cincinnati for the American Athletic Conference championship in Memphis, Tenn. After winning their first American Athletic Conference last season, the Memphis Tigers want to make sure they do not skip a beat with Silverfield now their third different coach in six seasons. (AP Photo/Mark Humphrey, File)

Memphis is playing for the first time in four weeks, since a win over Arkansas State in its Sept. 5 season opener before having to postpone two games because of COVID-19 cases in its program. The Tigers have won the last six games in the series against SMU, which was 8-0 last season before a 54-48 loss in Memphis last October.

The former graduate transfer quarterbacks who are both back after combining for 806 yards passing without an interception in their head-to-head meeting last November — SMU's Shane Buechele had 456 yards and Brady White 350 in the win. White, a former graduate transfer from Arizona State, was the only 4,000-yard FBS passer last season, and had 280 yards passing with four touchdowns in the opener. Buechele began his career at Texas before throwing for 3,929 yards and 34 TDs for SMU last season. He has 852 yards and seven TDs in three games this year.

Memphis: TE Sean Dykes had 10 catches for 137 yards and two touchdowns in the opener against Arkansas State.

SMU: Redshirt freshman RB Ulysses Bentley IV is averaging 10.6 yards per carry. He has rushed for 380 yards on only 36 carries, and already has seven touchdowns.

SMU is one of only two American Athletic Conference teams to play three games in September, even after having a game at TCU postponed because of a virus outbreak for the Frogs. ... The Mustangs have averaged 49 points in their first three games, and are 3-0 in consecutive seasons for the first time since 1983-84. ... Memphis has played only one game since its last trip to Dallas, a 53-39 loss to Penn State in the Cotton Bowl last Dec. 28 in Ryan Silverfield's debut as their head coach. That game was played at AT&T Stadium, about 25 miles from SMU's campus. ... The Mustangs have won their last seven home games since Memphis won 28-18 at the end of the 2018 season.

By Paul Newberry 23 minutes ago
41 minutes ago
By Steve Megargee 2 hrs ago
2 hrs ago
By Ralph D. Russo 3 hrs ago