No. 25 Pitt looks to extend mastery over Syracuse 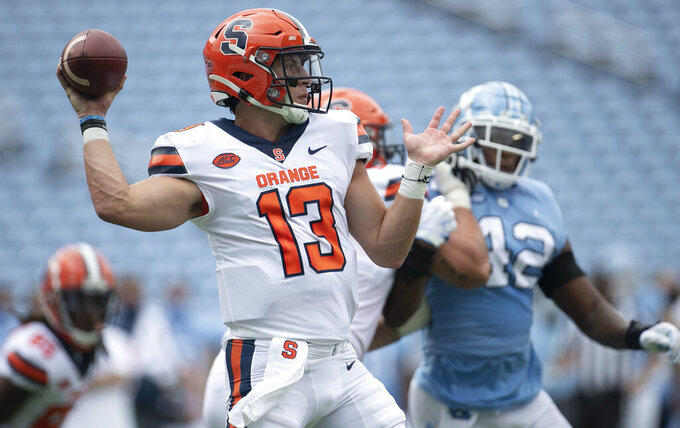 The Panthers entered head coach Pat Narduzzi's sixth season believing they have enough on both sides of the ball to be in the mix for a trip to the ACC Championship game. There was little in a season-opening 55-0 dismissal against overmatched Austin Peay to dissuade that notion. The Orange will provide a significant step up in class, but the Panthers have dominated the series between the two schools in recent years, winning 13 of the last 15 meetings. Syracuse needs something to build momentum or else their stellar 2018 mark (10-3) will start to look like a one-year blip.

Syracuse's offensive line against one of the best defensive fronts in the country. The Orange allowed seven sacks last week in a loss to North Carolina. The task of protecting quarterback Tommy DeVito figures to be just as difficult. The Panthers collected nine sacks in a 27-20 win over the Orange in 2019, knocking DeVito out of the game. If Syracuse wants any shot at the upset, it needs to keep DeVito upright.

Syracuse: Junior K Andrew Szmyt is the active leader in the FBS in points per game (9.5) and field goals per game (1.88). Considering how close the series has been of late — four of the last five meetings have been decided by seven points or less — Szmyt's production and his accuracy give the Orange a leg up.

Pitt: Freshman WR Jordan Addison showed flashes of why he may thrive in offensive coordinator Mark Whipple's pass-heavy system against Austin Peay. Addison had eight touches against the Governors, most of them on short passes designed to get him in space.

The Panthers have won their last eight games against the Orange at Heinz Field. ... Pitt's 24 ACC wins since 2015 are tied for third-most in the conference over that span. ... This is the first time since 2001 the Orange have opened with consecutive games against ranked opponents. ... Syracuse S Andre Cisco's 13 career interceptions are tied for fourth all-time in school history. Cisco has a pick in four straight games dating to last season. ... DeVito's streak of 201 consecutive passes without an interception is the second-longest active streak in the FBS and a school record.