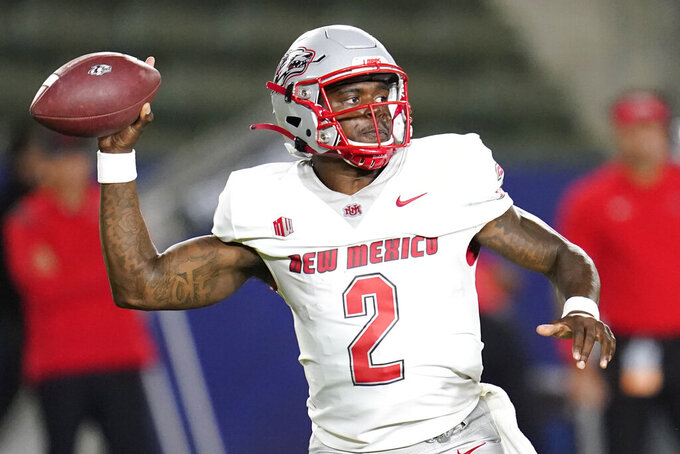 New Mexico quarterback Terry Wilson (2) throws a pass during the first half of an NCAA football game against the San Diego State Saturday, Oct. 9, 2021, in Carson, Calif. (AP Photo/Ashley Landis)

Bell had a 40-yard carry on the Aztecs’ first play from scrimmage and finished with his fourth 100-yard game of the season, hitting the mark before halftime of San Diego State’s Mountain West Conference opener.

San Diego State is off to its second 5-0 start in 46 years, also doing it in 2017, and won a game as a ranked team for the first time since Oct. 7, 2017, against UNLV. The Aztecs are one of 13 remaining undefeated teams in the nation.

“These guys have worked hard and you can’t say enough about our coaches and our players,” Aztecs head coach Brady Hoke said. “ As much as anything, the leadership of our seniors, they have really done a nice job.”

On defense, the San Diego State gave up 66 yards rushing and 193 yards in total offense in its eighth consecutive victory over the Lobos (2-4, 0-2). San Diego State entered second in the nation with 46.0 rushing yards allowed per game.

New Mexico used its defense to avoid a shutout as Ray Leutele forced Bell's fumble in the third quarter and returned it 15 yards for a touchdown. Terry Wilson Jr., was 13 of 25 passing for 127 yards with an interception, and Aaron Dumas rushed for 77 yards.

“We did some things in spurts, but still it was not good enough,” said New Mexico head coach Danny Gonzales, a former San Diego State assistant. “We've gone way too many quarters without scoring touchdowns. We're (creating) opportunities on defense but we're not capitalizing on offense. ... You have to score to have a chance to win.”

San Diego State started fast, holding New Mexico to a three and out to open the game, then getting Bell’s 40-yard run to the Lobos’ 23-yard line. Four more Bell carries put the Aztecs into the end zone after his 1-yard score as he carried five times for all 63 yards on the drive.

“It was what I normally see from Greg, whether it’s practice, in those opportunities, or you see him in a game situation,” Hoke said after Bell delivered two weeks after he injured his shoulder and was reduced to two carries against Towson. “He has very good vision he did a nice job of the burst through the hole.”

After Matt Araiza’s 40-yard field goal on the first play of the second quarter gave San Diego State a 10-0 lead, the Aztecs defense turned in two more three and outs before increasing the lead. Brookshire led a 10-play 66-yard drive that he capped with his own 1-yard plunge for a 17-0 lead.

The Aztecs held the Lobos to minus-5 yards rushing in the third quarter, before Leutele got New Mexico on the scoreboard. Leutele not only stripped Bell of the ball deep in Aztecs territory, he carried the ball into the end zone to cut the San Diego State advantage to 17-7.

San Diego State struggled on offense to open the second half, running seven plays in its first three third-quarter drives with no first downs before putting together a five-play, 60-yard scoring drive. Immediately after Leutele’s defensive TD, Brookshire drove the Aztecs down the field and scored on an 11-yard run for a 24-7 lead.

“I think I played decent, but you know as (in) every game, there’s definitely a lot to work on, go over the film, watch how it went and go into this week working to improve,” said Brookshire, who had 130 yards passing in his return from a right ankle injury against Arizona on Sept. 11

Wilson left the game on New Mexico's final drive with a dislocated left elbow, while wide receiver Keyonta Lanier appeared shaken up in the first quarter and left the game in the fourth quarter with a right arm injury. X-rays on Wilson's elbow were negative.

New Mexico: The offensive woes continued for the Lobos, who have averaged 7.5 points over their last four games and have another undefeated team looming Oct. 23 at Wyoming.

San Diego State: Bell showed he is feeling just fine after his shoulder injury Sept. 25 and the defense stepped up after giving up 52 total points over its previous two victories as the Aztecs showed no letdown as a ranked team.