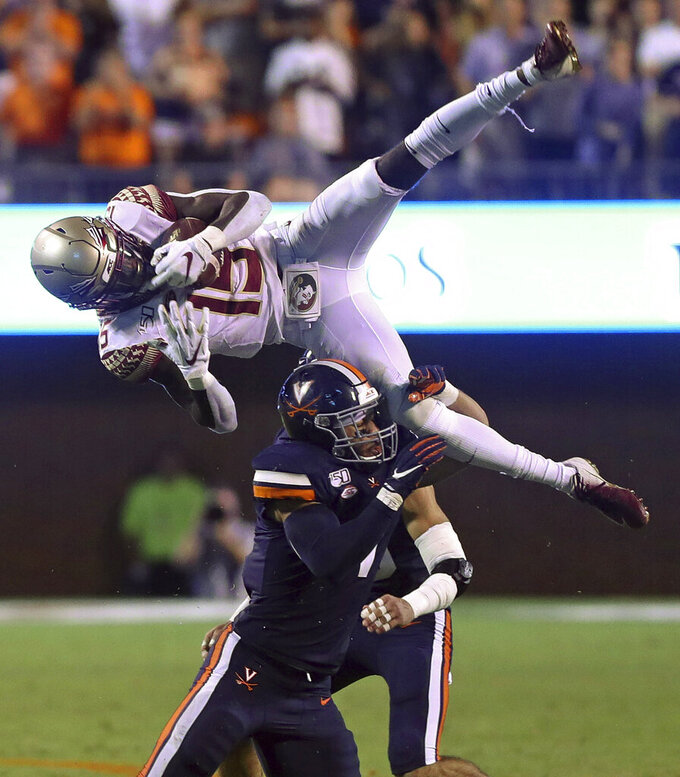 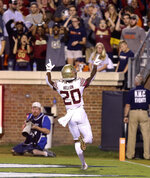 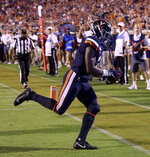 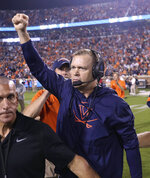 CHARLOTTESVILLE, Va. (AP) — Virginia turned the clock back 24 years and the No. 25 Cavaliers handed Florida State another gut-wrenching defeat.

The Cavaliers stopped Cam Akers on a final-play run from the 4 on Saturday night and barely hung on for a 31-24 victory that was reminiscent of the one in 1995 when they stopped Warrick Dunn on the final play in handing the Seminoles' their first ACC loss.

"Anyone that was in the stadium today witnessed an amazing football game," Virginia coach Bronco Mendenhall said. "Our defensive heart and effort was magical. I won't forget this one ever."

Wayne Taulapapa ran for three touchdowns, the last with 2:34 remaining, to cap a rally that seemed doomed after the Cavaliers were poised to tie it with 6:02 remaining until Brian Delaney was wide right on his extra point try, keeping the Seminoles ahead, 24-23.

"After that missed (PAT), it got a lot more serious in the matter of the defense really has to win this game," safety Joey Blount said.

The Cavaliers (3-0, 2-0 ACC) stopped Florida State on the next three plays, and Bryce Perkins led Virginia down the field. It took them just six plays to travel 72 yards with Joe Reed ripping off a 22-yard run and Perkins hitting Hasise Dubois for 35 yards to the Florida State 15.

A targeting call against Seminoles cornerback Renardo Green moved the ball to the 7, and two Taulapapa runs finished the drive.

The Cavaliers went for two and Perkins was intent on passing, but when the Seminoles applied pressure in the backfield, he scrambled away from it running left and finally darted toward the end zone, got a key block and slithered into the end zone for the 31-24 edge.

"How do you stop him?" Mendenhall said of Perkins, a transfer who arrived before last season and had led Virginia to wins in 11 of their 16 game with him behind center. "We're not growing the program at the rate we're growing the program without him."

Virginia improved to 3-0 for the first time since 2005, and fans stormed the field after the frenetic final few plays.

The Seminoles (1-2, 0-1) drove to the Virginia 4 for the final play of the game, helped by four 15-yard penalty calls against the Cavaliers, but with no timeouts remaining and both teams scrambling to line up, De'Vante Cross slowed Akers and Bryce Hall finished him off.

"We've just got to come back tomorrow and try and fix the mistakes we had in this game, the critical mistakes," said Gabe Nabers, who scored Florida State's first touchdown on a 10-yard pass from James Blackman. "You can't have those penalties."

With the game tied at 17, Blackman hit Tamorrion Terry for 17 yards on third-and-10 from the FSU 25, and the Seminoles went up-tempo. Blackman hit Tre McKitty for 30 yards on the next play, three runs by Akers netted 11 yards and Blackman hit Keyshawn Helton for a 17-yard touchdown to put them ahead 24-17.

Akers, who ran for just 20 yards in the half, capped the drive by catching a 3-yard pass from Blackman.

Delaney's missed PAT almost made "wide right" a positive in Seminoles' history, but it was not to be. A pair of wide right field goal tries by Florida State kickers against Miami in 1991 and 1992 games with nation championship implications sent the Seminoles to crushing defeats.

Florida State: Rumors of the Seminoles' demise are exaggerated. Blackman played well after a slow start, and the maligned defense was solid until late in the game when it was gassed because the Seminoles did a quick three-and-out between two Cavaliers scoring drives.

Florida State has been outscored 52-21 in the fourth quarter.

Virginia: The Cavaliers have often flinched when faced with adversity — or possible prosperity — in recent years, but with Perkins showing poise and the defense doing exactly what the team needed following the missed extra point, the new standard that Mendenhall has tried to instill seems to have taken hold.

Virginia trailed much of the night against a maligned FSU team, but the finish is unlikely to hurt them in the rankings.

Virginia: The Cavaliers are at home against next Saturday night to face Old Dominion.