No. 3 Buckeyes have something to prove in Big Ten title game 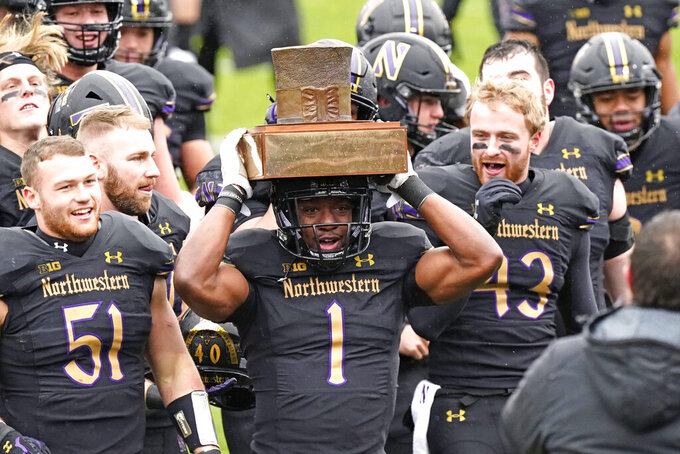 COLUMBUS, Ohio (AP) — A group of university administrators on a Zoom call decided Ohio State would play in the Big Ten championship game. Now the No. 3 Buckeyes are eager to show that not only are they the dominant team in the conference, but they also unequivocally deserve a spot in the College Football Playoff.

They do that by winning big Saturday.

Ohio State (5-0, CFP No. 4) can collect a fourth straight conference title by beating No. 15 Northwestern, but they're also seeking style points — a good thumping of the Wildcats on national TV to firm up their place in the national rankings.

In other words, the Buckeyes are motivated to dominate.

“Oh, we've definitely got something to prove,” All-American cornerback Shaun Wade said Tuesday. “Like I've been telling a lot of my teammates, we got to blow them out. We have to come to play and show the world what we can do.”

Because of COVID-19 issues, Ohio State was left with just five regular season games, one short of the threshold to play in the championship game set by the conference before the start of the pandemic-delayed season. Conference administrators last week voted to change the rule so the Buckeyes, who had already clinched the Big Ten East, could compete for the title and be better positioned to play for a national crown.

That came at the expense of Indiana, which at 6-1 had enough games in but had lost to Ohio State 42-35 on Nov. 21. Social media heated up with criticism aimed at the Buckeyes, whose body of work isn't as comprehensive as other top teams.

Let the people talk, said Ohio State's Justin Fields, who on Tuesday was named Big Ten Offensive Player of the Year and Quarterback of the Year.

“We’re one of the top four teams in the country for sure, and I think we control our destiny,” Fields said. “If we go out there on Saturday and handle business like we’re supposed to, we should be where we want to be.”

Tight end Jeremy Ruckert acknowledged the Buckeyes need to win and look impressive doing it to leave no doubt they belong in the playoff.

“It's pretty important,” he said. “I mean we try not to think about it as much, but what it comes down to is that every other (contending) school has more games than us. Every game that we have is looked at under a microscope. We try and just put the best game out there on film and really dominate and execute every play because that's what they're watching.”

Northwestern coach Pat Fitzgerald is a believer in the Buckeyes, no matter how many games they played. “If I had a vote," he said, "I’d vote them No. 2. I think they’re a complete football team, all three phases.”

Ohio State coach Ryan Day insisted he just wants to win the game — he doesn't care by how many points or how it looks to others. He said he hates the idea that style points matter.

“It goes against everything we've been brought up with,” Day said. "I don't think there's any other sport in the world where anything other than winning matters. So it's very unique. If you win by one point every week in the NFL, you'd win the Super Bowl.

"But college football is different, and this year it's even more strange."

By John Zenor 34 minutes ago
By Pete Iacobelli an hour ago
an hour ago
By Ralph D. Russo 5 hrs ago
By Ken Powtak 18 hrs ago