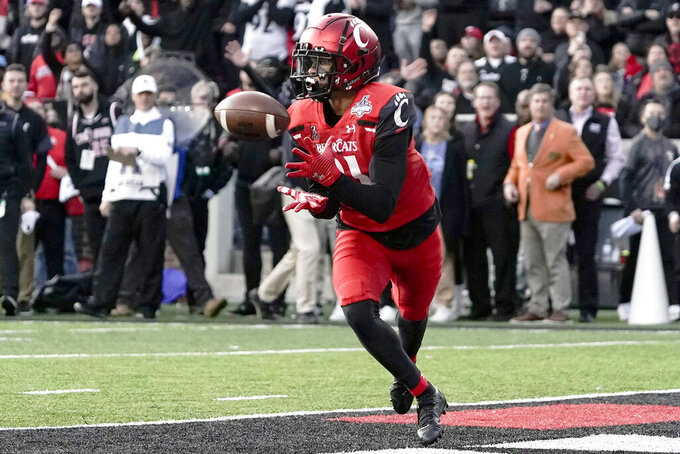 The Bearcats who are ranked No. 4 in the latest College Football Playoff rankings, are in position to become the first non-Power 5 team to qualify. The final rankings will be announced Sunday.

“The resounding statement is what we did on that football field,” Fickell said. “Nobody is going to call and ask us what we think. I don't think these guys can be denied that opportunity. It would be a shame.”

Cincinnati (13-0) which extended the nation's second-longest home winning streak to 27, scored three touchdowns in fewer than eight minutes to finish off its second straight AAC crown. The fans rushed the field amid a shower of confetti.

“I don't really remember last year (after beating UCF in the AAC title game), but this year I wanted to get out there and celebrate with the fans,” Ridder said. “It's a blessing to have never lost a game I've played at Nippert. We have such a great atmosphere here.”

Cougars junior QB Clayton Tune passed for 250 yards with two touchdowns and an interception as Houston (11-2) lost for the first time since dropping its season-opener to Texas Tech on Sept. 4.

It was a wild first quarter on Saturday with the teams combining for 24 points and 316 yards.

After the Cougars settled for a field goal on their opening possession, the Bearcats responded by going 82 yards in five plays capped by Ridder's 25-yard TD pass to Tyler Scott.

Nathaniel Dell's diving 16-yard TD catch put the Cougars back in front, 10-7. But on the first play of Cincinnati's next possession, Ford broke free for a 79-yard TD run to give the Bearcats a four-point lead.

“We went toe to toe with them for as long as we could,” Houston head coach Dana Holgorsen said. “They are first-class and deserving of top four. I don't know how you keep Cincinnati out.”

Cincinnati led 14-13 at halftime despite Houston having possession for more than 22 minutes.

“Going into the half, it was a battle,” Fickell said.

But momentum shifted to the Bearcats early in the third quarter.

After a pass interference penalty on Marcus Jones negated a fourth-down stop by the Cougars, Ridder tossed an 8-yard TD pass to Leonard Taylor.

“During halftime we wanted to keep our foot on the gas," Jones said. “We wanted to limit big plays.”

But those big plays kept coming for Cincinnati.

On Houston's next play, Bearcats linebacker Joel Dublanko intercepted Tune and Ridder hit Alec Pierce for a 21-yard TD. Just like that, it was 28-13 Bearcats.

“They were attacking the middle of the field. I just read the QB's eyes and made a play," Dublanko said.

Ford had another long touchdown run of 42 yards, and within fewer than eight minutes, Cincinnati turned a one-point lead into a 22-point advantage.

As for reaching the playoff, the Bearcats say they are ready if an invite comes.

“Put the ball down and let us play,” Dublanko said.

The pass interference call on Jones shifted the momentum in the third quarter and the Cougars never recovered. Holgorsen said he didn't think it was the correct call, but he also wasn't going to pin the loss at that one moment. “I played his hands,” Jones said. "It looked like he didn't want to throw the flag, then he threw it. I can't get mad at him for doing his job.”

There have been a few occasions this season when things weren't looking great for the Bearcats at halftime. Each time, the senior players managed to rally their teammates resulting in an immediate response in the third quarter. On Saturday, it was Ridder and senior cornerback Coby Bryant who led the locker room charge. “When you have an older group, you can kind of see the look in their eyes,” said Fickell. “They came out in the second half on a mission.”

Houston: Momentum was on Houston's side at halftime when they trailed 14-13. But two crucial plays in the third quarter, leading to 21 straight points for the Bearcats. The first one was the pass interference penalty on Jones. The second was an interception thrown by Tune on the first play after the Bearcats scored. “We didn't play well enough to beat a good team like that,” Holgorsen said.

Cincinnati: Despite being 12-0, the Bearcats have mostly relied on help from other teams to earn a spot in the College Football Playoff. They got more assistance earlier on Saturday when Baylor held on to beat Oklahoma State in the BIG 12 championship game. The Bearcats also needed a quality win to put alongside winning at Notre Dame and beating Houston helps with that. “We never wanted to carry the torch for the non-Blue Bloods, or anyone else,” Fickell said. “We just want to be us.”

Houston: A bowl game yet to be determined.

Cincinnati: A possible berth in the College Football Playoff.