No. 3 Cincinnati hosts No. 16 Houston for AAC championship 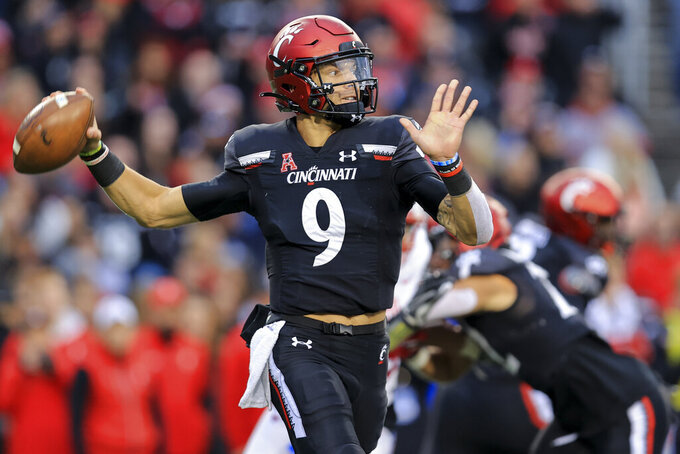 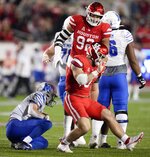 CINCINNATI (AP) — There are larger implications for No. 3 Cincinnati — namely staying in the College Football Playoff picture — when the Bearcats meets No. 16 Houston in the American Athletic Conference championship.

But the Bearcats certainly need a win Saturday to accomplish their big objective.

“We’ve had one goal and one objective when we walked in the door here five years ago, and it hasn’t changed. And it’s always been to play for championships,” Cincinnati coach Luke Fickell said.

Bearcats quarterback Desmond Ridder has been in the program long enough to remember when winning a conference title wasn’t a realistic goal, let alone reaching the College Football Playoff. The Bearcats went 4-8 in Ridder’s freshman season, which also was Fickell’s first season at the helm.

“It’s something we’ve been striving for since I’ve got here,” Ridder said. “It’s something Coach Fick has preached since he got here. A national championship is on the minds of the big dogs. I’m not sure how much they care about a conference championship, but it’s one of the biggest things in our program.”

Cincinnati is ranked No. 4 in the most recent CFP rankings, putting the Bearcats in position to become the first team from a non-Power 5 conference to reach the playoff. But they need to take care of business against the Cougars, who are ranked No. 21 in the CFP.

“In my opinion they’re just another team, and they’re in our way,” Houston defensive lineman Derek Parish said. “(Rankings) are numbers made by people who watch football on a couch. We aren’t worried about that. Numbers don’t mean nothing. It matters when the ball is put down on the field.”

Houston and Cincinnati are among four FBS teams ranked in the top 10 nationally in both scoring offense and total defense. The similarities don’t stop there.

“Houston is as well-balanced and complete a football team as we’ve played all year,” Fickell said. “We’ve got a challenge ahead of us.”

Despite having won 11 straight games since losing to Texas Tech in the season opener, the Cougars didn’t move into the national rankings until the end of October and didn’t join the College Football Playoff rankings until mid-November.

“Really all year we feel like we haven’t been getting the respect we deserve,” Cougars linebacker Deontay Anderson said. “I just feel like we’re disrespected, and we really have a chip on our shoulder from that. We can’t wait to go out there and keep proving people wrong.”

Cincinnati has 18 players who already have earned their degrees, making it the fifth straight season with 10 or more senior graduates on the Bearcats roster. Ridder has hung around long enough to amass 43 wins as a starter, third-most in college football history.

“Being old is the only way you can win in college football,” Houston coach Dana Holgorsen said.

The AAC championship game is played at the home stadium of the top seed. While both Cincinnati and Houston finished 8-0 in the league, the Bearcats earned a home game since they had the higher CFP ranking. The Bearcats have won 26 straight games at Nippert Stadium, the second-longest home winning streak in the nation behind Clemson (34). Houston has beaten the Bearcats just once on the road since 1972.

“Not going to lie, I wish this was at a neutral site,” Holgorsen said.