No. 3 Cincinnati takes on Malzahn-led UCF 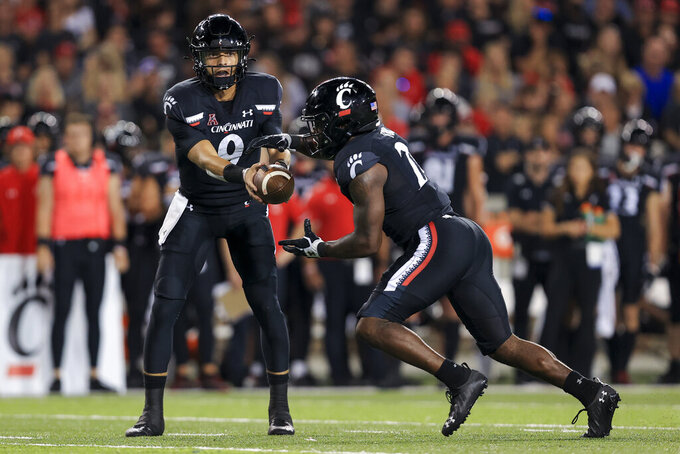 Cincinnati quarterback Desmond Ridder, left, hands off the ball to running back Jerome Ford during the second half of an NCAA college football game against Temple, Friday, Oct. 8, 2021, in Cincinnati. (AP Photo/Aaron Doster)

Line: Cincinnati by 21 1/2, according to FanDuel Sportsbook.

With a signature win over Notre Dame on its resume and some shifting in the top 10, Cincinnati moved up this week to No. 3 — the highest AP ranking in program history. The challenge for the Bearcats is being dominant enough against their remaining American Athletic Conference opponents to claim a spot in the College Football Playoff. Cincinnati is trying to become the first team outside of the Power Five to be chosen for the playoff.

The Bearcats’ defense against the Knights' run game. RB Johnny Richardson rushed for 104 yards and a touchdown in UCF's 20-16 win over East Carolina. Mark-Antony Richards added 58 yards, including a 1-yard touchdown plunge with 23 seconds left that won the game. Cincinnati's defense is top notch, allowing just 294.2 yards per game — No. 12 in the nation.

UCF: Freshman QB Mikey Keene has been running the offense for the Knights since Hawaii transfer Dillon Gabriel was lost for the season with a broken clavicle last month. He was 23 for 35 for 194 yards with an interception against ECU.

Cincinnati: RB Jerome Ford earned AAC offensive player of the week honors after rushing for a career-high 149 yards and two touchdowns in the Bearcats' 52-3 win over Temple. His 75-yard TD run on the first play of the second half sparked a 28-point third quarter. He has 520 yards rushing and eight touchdowns this season.

Bearcats QB Desmond Ridder has thrown for 1,304 yards and 12 touchdowns and just two interceptions. He also has 114 yards and three scores on the ground. ... Ridder is the nation’s winningest quarterback with a 35-5 career record. ... LB Deshawn Pace has 39 tackles and two interceptions for Cincinnati. .., The Bearcats have won 31 straight games against unranked opponents. … The win last Friday ensured Cincinnati's presence in the AP top 10 for a full year. The Bearcats have been there since slotting in at No. 8 on Oct. 11, 2020. ... Cincinnati has won the last two games in the series by a total of six points. ... Cincinnati is 36-6 (.857) since the start of 2018 and 14-1 record since the start of 2020. ... UCF has accumulated a record of 44-10 since the start of the 2017 season. ... The Bearcats have won 23 straight at Nippert Stadium, the second-longest home win streak in the country behind Clemson (31).