No. 3 Clemson, No. 22 Virginia after next step in ACC game 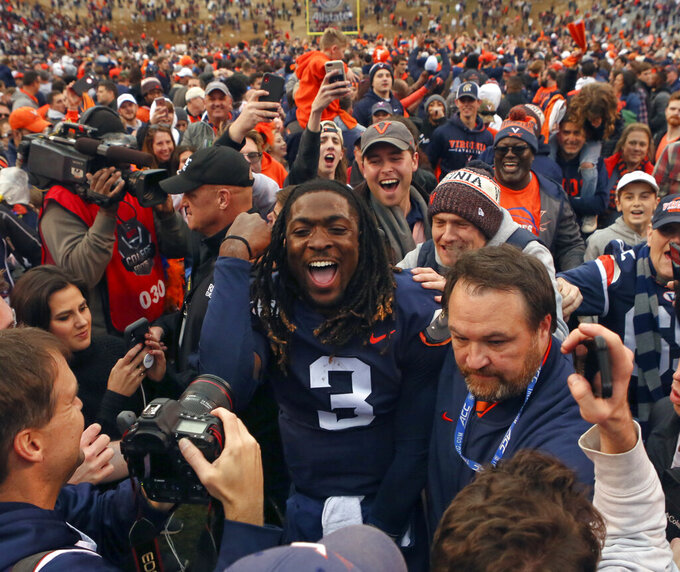 COLUMBIA, S.C. (AP) — The Atlantic Coast Conference title game is special opportunity for first-time participant No. 22 Virginia. It’s just as special for No. 3 Clemson, coach Dabo Swinney said despite the fact his Tigers have won the past four championships.

His 12-0 Tigers are just as jazzed at facing the Cavaliers (9-3) on Saturday night in Charlotte, North Carolina, as they were when this run of ACC success began in 2015.

“These guys love to work,” Swinney said Sunday. “They love the challenge of preparing every single week. So for us, this is the next goal.”

Clemson already has achieved several milestones this season. The Tigers (No. 3 CFP) have a program-record 27 straight wins and a second consecutive perfect regular season for the first time in school history.

Beat Virginia and Clemson becomes the first in any league with five straight championship game wins.

“We all know we’ve got playoff opportunities and all that stuff,” Swinney said. “But the way we got to 12-0 is focusing on the task at hand and that’s the way it’ll be this week, just lock in and try and play our best four quarters of the season.”

Cavaliers coach Bronco Mendenhall will look to have his players ready for their next step as well.

Virginia was in position late in the season a year ago, but overtime losses to Georgia Tech and Virginia Tech knocked them out of the Coastal Division race. That disappointment infused the team’s postseason (a 28-0 win in the Belk Bowl over South Carolina) and spring and summer workouts.

“I just hadn’t prepared the team quite enough. We weren’t quite mature enough, quite sound enough and quite productive enough in the critical moments to break through,” he said.

Mendenhall said his players and staff recognized how close they were to their goals and honed in the late lapses. When put in a similar spot this year, the Cavaliers responded with hard-fought victories this month over North Carolina (38-31), Georgia Tech (33-28) and, this past Friday, Virginia Tech (39-30) to clinch the division title . Beating the Hokies ended a streak of 15 straight losses to their Commonwealth rival.

“This stage is an unknown for our team and our institution, and that’s a good thing,” he said. “A more masterful job has to be done on my part to make what is not normal, normal for this team in a short amount of time.”

Mendenhall understands it won’t be easy.

Clemson’s defense underwent massive losses among it defensive starters, including its front four, from last year’s national championship squad, yet has held all 12 of its opponents this season to less than 300 yards of offense. Only one team, North Carolina, has scored 20 points on the Tigers this fall.

Mendenhall has watched Venables craft different game plans full of tweaks and twists with each different Clemson game he studies. “There is a core, there’s a standard, but there’s innovation week to week that you discover as you go,” he said.

But Virginia is led by quarterback Bryce Perkins, the ACC leader in total offense (303 yards per game) who’s gaining more than 75 percent of his team’s per-game average of 390 yards.

Swinney said the Tigers defenders will be challenged by a mature leader performing at the height of his powers.

“They do a great job schematically to make sure he's equipped with answers,” Swinney said. “Just going to be a great competitor to have to find a way to beat.”

Mendenhall said his players are focused on continuing their success next week, not just arriving with wide eyes and a plan for another step next season.

“It’s a magical opportunity for this program,” he said.