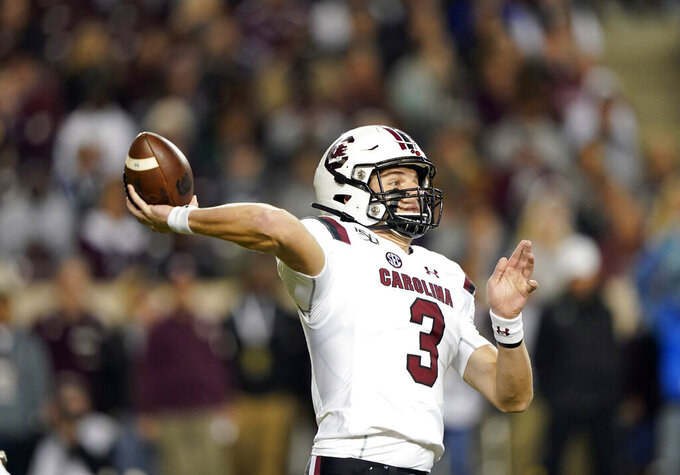 The Tigers had one of their worst defensive performances in Venables’ tenure when they hosted the Gamecocks — and he is ensuring his players remember the effort as well.

Clemson, about six weeks before winning the national championship last year, gave up 600 yards and five passing TDs to the Gamecocks in a 56-35 Tigers’ win. South Carolina quarterback Jake Bentley threw for 510 yards and set off a panic.

“Yeah, we didn’t play well,” Venables said this week. “That never sits well with you, so you try and learn from failures and how you prepare.”

Clemson fans expected their Tigers to crush their state rivals, who instead threw a scare into the College Football Playoff-bound Tigers.

The Tigers (11-0) are looking to redeem themselves this week. Clemson is looking for its 27th straight win and second straight 12-0 regular season when they play the Gamecocks (4-7).

South Carolina and Clemson were both off last week and Tiger defenders have spent part of the past two weeks watching — and re-watching — last year’s game tape.

“That was super embarrassing for us as a back seven,” said Clemson safety Tanner Muse. “We just can’t let something like that happen again. That’s just not who we are.”

Muse, a senior, painfully broke down the film. He said the Tigers were too slow getting pressure on Bentley, who set personal career highs with five touchdown throws and in passing yards. Muse said technique was shoddy at times, allowing for passes to areas that were supposed to be covered. He added that tackling when the Tigers had a chance to limit the damage was also inconsistent.

South Carolina receiver Deebo Samuel, now with the San Francisco 49ers, had 10 catches for 210 yards and three touchdowns. Samuel’s teammate Shi Smith had 109 yards. For Clemson to allow a pair of 100-yard receivers is unthinkable in Venables’ lock-down world.

“Human nature is when you feel like you’re playing well is to take one hand off the wheel,” Venables said. “Bad things can happen.”

There seems to be little chance of more bad things happening to Clemson in this one.

The Tigers are second nationally to Ohio State with 128 yards passing allowed per game. Bentley, South Carolina’s starting quarterback, has been out since week one with a foot fracture. The Gamecocks rank 67th in passing yardage and with freshman Ryan Hilinski leading the offense, South Carolina has only 12 touchdown passes this season.

With South Carolina already out of the bowl picture, a big effort against Clemson would be the balm to a painful season.

“It’s going to be what it is,” said South Carolina running back Tavien Feaster, who won two championship rings in three seasons at Clemson before transferring. “It’s a rivalry game. The other team’s going to look to play you hard. Now, that I’m here, it’s a rivalry game. We’ve just got to get up and handle our business.”

The Gamecocks could be without their best receiver in Bryan Edwards, who coach Will Muschamp said was questionable with a knee injury sustained against Appalachian State three weeks ago.

If Edwards can’t go, that could make things a bit easier for Clemson’s secondary. Then again, last year’s struggles had an upside for the Tigers.

Following the South Carolina game, Clemson allowed just 29 points total in their final three games in the Atlantic Coast Conference championship win over Pitt (42-10), the CFP semifinal against Notre Dame (30-3) and that memorable 44-16 beatdown of Alabama to win the national title.

The Tigers especially tightened up the pass defense, giving up 154 yards a game through the air against those last three opponents.

“The pride was wounded” against South Carolina, Venables recalled. “We had good leadership that responded the right way, a little more focus afterward.”