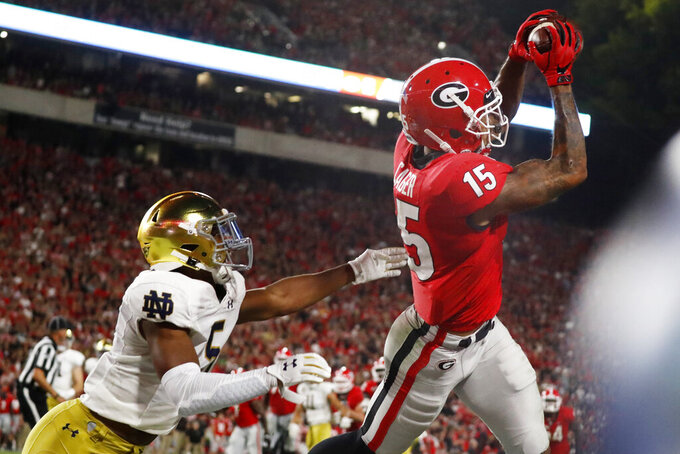 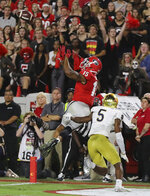 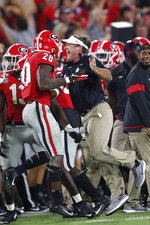 ATHENS, Ga. (AP) — On a raucous Saturday night between the hedges, No. 3 Georgia held on for a gutsy win that might have ramifications all the way to the College Football Playoff.

For No. 7 Notre Dame, it was another big-game loss but a performance that should bring more respect.

Jake Fromm threw a 15-yard touchdown pass to Lawrence Cager early in the fourth quarter and the Bulldogs survived for a 23-17 victory that was much tougher than many expected.

"That's what college football is all about, man," Georgia coach Kirby Smart said. "I hate that somebody had to lose that game. I've got a lot of respect for the way they played, and all the negative things they've heard, and to come out and play the way they did. They played really physical as a team, and so did we. We persevered."

The Bulldogs (4-0) trailed 10-7 at halftime but turned the momentum when redshirt freshman Divaad Wilson snatched away a deflected pass by Ian Book for an interception deep in Notre Dame territory.

The Fromm-to-Cager combination helped push Georgia to a 23-10 lead before the Fighting Irish (2-1) made a game of it at the end.

Book's 4-yard touchdown pass to Chase Claypool cut the deficit with 3:12 remaining, the Notre Dame defense held, and Book got the ball back at his own 48 after a poor punt with just under 2 minutes to go.

The Irish got as far as the Georgia 38, but no farther. It ended with Book zig-zagging on a desperate scramble before hurling up a long pass that fell incomplete, denying Notre Dame the signature win over a top opponent it so desperately needs in its first visit ever to Sanford Stadium.

"This stings a little bit," defensive lineman Khalid Kareem said. "But our morale is still high. The season's not over."

With Georgia up 13-10 after a pair of field goals by Rodrigo Blankenship, Cager hauled in a 36-yard pass along the sideline to push the Bulldogs into the red zone. Then, on third-and-7 from the 15, Notre Dame brought a blitz and Fromm coolly lofted one toward Cager along the left side of the end zone.

A half-foot taller than cornerback Troy Pride Jr., the 6-foot-5 graduate transfer leaped high to make the catch and tapped down his right foot before tumbling out of the bounds to put Georgia in command, 20-10 with 13:19 remaining.

Desperate to cut into the deficit, Notre Dame called a flea-flicker play. But when Book was pressured out of the pocket and let go of a pass on the run, J.R. Reed dove in front of the intended receiver to make a brilliant interception as he slid into the Irish bench.

Reed sprinted all the way across the field, hopped atop the Georgia bench and bounced for the record crowd of more than 93,000 while wearing shiny, Road Warrior-style shoulder pads that go to the latest Bulldog defender to get a turnover. It led to Blankenship's third field goal.

In a most efficient performance, Fromm was 20 of 26 for 187 yards. Cager was his favorite target, hauling in five passes for 82 yards.

D'Andre Swift led Georgia on the ground with 98 yards and a touchdown, including a dazzling play when he hurdled completely over a would-be tackler who went at his legs.

A two-touchdown underdog, Notre Dame took advantage of a huge turnover by Georgia punt returner Tyler Simmons to grab the lead. Attempting to make a fair catch, he fumbled the ball away and Claypool recovered for the Irish at the Georgia 8 to set up Book's 1-yard touchdown pass to Cole Kmet on fourth down.

Book appeared to be trying to hit Tony Jones Jr. in the back of the end zone, but Kmet reached up with one hand to pull it down.

Swift scored on a 3-yard run to cap a 75-yard drive, but Jonathan Doerer booted a 27-yard field goal on the final play of the first half.

Book finished 29 of 47 for 275 yards, giving Notre Dame a chance right to the end even though the Irish were outgained 152-46 in rushing yards.

"I left the field thinking we beat ourselves," Claypool said.

The Bulldogs lost left guard Solomon Kindley in the first half with what appeared to be a left ankle injury.

Justin Shaffer took over and did a solid job, though Smart wasn't pleased with him getting an unsportsmanlike conduct penalty.

Georgia's offensive line also was bolstered by the return of right tackle Isaiah Wilson, who had missed the last two games with an ankle injury. Without much practice time, he was able to take some meaningful snaps in the second half.

Notre Dame's Brian Kelly said it was "probably one of the most physical games I've coached."

"You could hear out there," he said. "The physicality was real."

Notre Dame: Dropping to 8-29 against Top 10 teams since Lou Holtz left after the 1996 season, this still seemed like a step in the right direction for the Fighting Irish. Instead of getting blown out against a leading opponent, as they were by Alabama in the 2013 BCS championship game and Clemson in last year's playoff semifinals, Notre Dame was in this game all the way.

But Book's two interceptions were a killer, and the Irish also seemed to struggle with the noise judging by five false-start penalties and a botched snap on a fourth-down play. "We practice in a loud environment," Kelly said. "I'm disappointed we didn't handle it better."

Georgia: After three straight blowout victories, the Bulldogs finally got the test they so desperately needed. Maybe it wasn't as dominating as some were expecting, but this was the sort of win that should look good on the resume if they're in the mix for a playoff spot.

Notre Dame: Returns home next Saturday to host No. 21 Virginia.

Georgia: The Bulldogs are off next weekend before traveling to Tennessee for a Southeastern Conference game on Oct. 5.