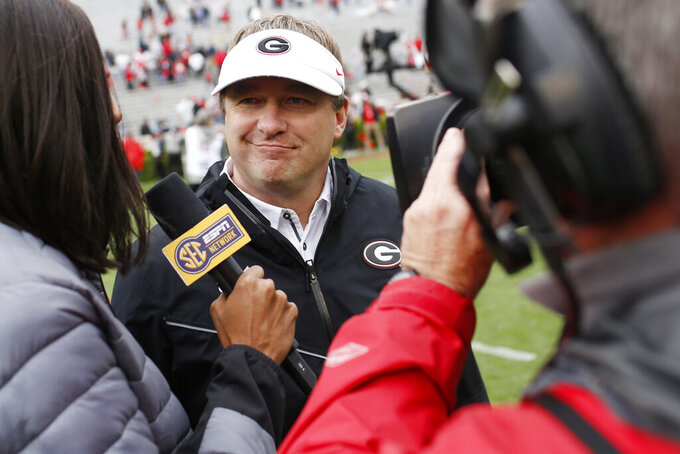 FILE - In this April 20, 2019, file photo, Georgia coach Kirby Smart speaks with the media after an NCAA college football spring game in Athens, Ga. For the first time, the defending national champion Clemson Tigers are No. 1 in The Associated Press preseason Top 25 presented by Regions Bank, Monday, Aug. 19, 2019. Alabama is No. 2, Georgia is No. 3. (Joshua L. Jones/Athens Banner-Herald via AP, File)

Georgia's chase of a third straight SEC Eastern Division title begins with the Bulldogs having won 13 straight inside the division. For Vanderbilt, the chance at the biggest upset in school history to kick off the season.

Vanderbilt's run defense against Georgia's rushing attack. Vanderbilt gave up an average of 194.7 yards rushing per game last season and ranked 94th. The Commodores must slow down running back D'Andre Swift, who led Georgia last season with 1,049 yards and 10 touchdowns.

Georgia: QB Jake Fromm is 23-5 as a starter and coming off a season where he set a school record completing 67.3 percent of his passes to rank 12th nationally. He also was fifth nationally with a 171.2 passing efficiency. Now the junior is looking for new receivers to step up with Mecole Hardman, Terry Godwin or Riley Ridley all in the NFL.

Vanderbilt: RB Ke'Shawn Vaughn decided to come back to improve his NFL draft stock and graduate in December. He's the SEC's top returning rusher after piling up 1,244 yards last season. He averaged 7.9 yards per carry and 103.7 yards per game.

Georgia has won 19 of its past 22 season openers, going 95-27-3 all-time. ... This is Georgia's first SEC game to open a season since 1995 and first road opener against a SEC team since 1994, and Bulldogs won both those games against South Carolina. ... Georgia last opened a season against Vanderbilt in 1956 and lost 14-0 in Nashville. The Bulldogs opened the 1952 season beating Vanderbilt 19-7 in Nashville. ... Georgia returns four of five starting offensive linemen. ... The Commodores are 2-5 all-time in August. ... Vanderbilt has Gerry Gdowski as new offensive coordinator. ... Vanderbilt averaged 411.2 yards per game last season, its highest since 1974.