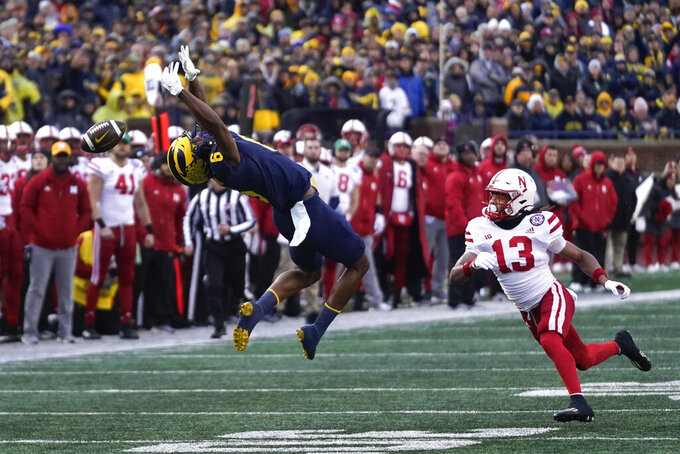 ANN ARBOR, Mich. (AP) — No. 3 Michigan hosts Illinois in the Big House on Saturday with plenty at stake for both teams.

The Wolverines (10-0, 7-0 Big Ten) are aiming to stay perfect before their showdown with No. 2 Ohio State next week for the East Division title and a College Football Playoff spot likely up for grabs. The Fighting Illini (7-3, 5-2) need to win their final two games and hope that Purdue loses a game to grab the West Division crown.

“A lot on the line for them, for us," said Michigan coach Jim Harbaugh. “And the way we always approach a game, every day matters but the games count. … We’re really going to have to be on point.”

The game is equally crucial for Illinois, which has back-to-back losses to unranked Michigan State and Purdue.

“I think a win would be critical just because of where we are in our division, where we are in jockeying and putting ourselves in postseason play,” coach Bret Bielema said. “To play Michigan and beat them at Michigan, I think a lot of people will talk about it.”

The two teams boast the top two defenses in the Bowl Subdivision and two of the top three running backs in the nation.

Illinois' Chase Brown who was questionable for the game with an injury, leads the country with 1,442 total rushing yards. He will face a top-ranked Wolverines defense that is giving up only 72.7 yards per game and allowing opponents over the last five games to score a total of three points in the second half.

“Our run wall has been very good,” Harbaugh said. “It’s going to be tested this week probably like none other up to this point. Illinois is very strong at the line of scrimmage on both sides of the ball. Outstanding, outstanding runs scheme, outstanding running back. So it’ll be a real challenge and a task for our team.”

The Illini defense also will be tested with stopping Blake Corum, the nation’s third-leading rusher with 1,349 yards and 18 touchdowns.

Time is running out to fix Michigan's passing attack before it faces Ohio State.

Quarterback J.J. McCarthy is coming off his worst performance since becoming a starter, completing just 8 of 17 for 129 yards vs. Nebraska. McCarthy has thrown fewer than 170 yards in four straight game and completed below 50% of his passes two weeks in a row. Although the Wolverines are 24th in the nation in passing efficiency, they rank 95th in passing yards per game (208.9 yards).

Injuries are mounting for the Illini’s No. 5-ranked passing defense, which looks thin after losing sophomore cornerback Tahveon Nicholson for the rest of the year with a wrist injury.

Cornerback Tyler Strain (concussion) could miss this week and Illinois was already missing veteran Terrell Jennings, who rotated in behind ace Devon Witherspoon and Nicholson. The Illini likely will be turning to Xavier Scott and veteran safety Jartavius Martin, who has played cornerback in the past.

Bielema canceled a meeting with reporters Thursday after the death of his mother, Marilyn, the Illini said. An Illinois athletic department spokesman said that no decision has been made yet on whether Bielema will coach in Saturday's game.

One of his players, sixth-year senior defensive back Kendall Smith, will realize a dream of his late father this weekend by playing in the Big House. Smith's dad, Roderick, hoped that his son would play for Michigan; he was killed in a motorcycle accident when Kendall was 10.

Smith has developed into an important contributor in the Illini secondary, tied for second in the Big Ten in interceptions with four this year.