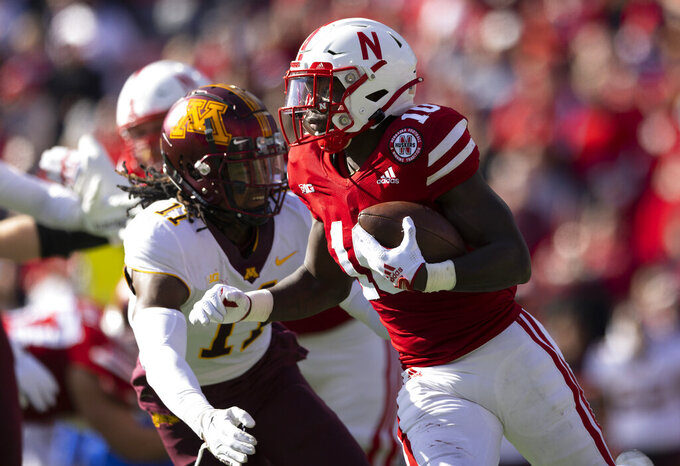 Michigan is on pace for a showdown in two weeks on the road against rival and second-ranked Ohio State for the Big Ten East title and spot in the College Football Playoff probably on the line. If Nebraska doesn’t win its final three games, the once-proud program will be the only Power Five team that hasn’t gone to a bowl since 2017.

RB Blake Corum against Nebraska’s defense. In every game, Jim Harbaugh’s top priority is to establish the Corum-led running game. So far, no team has been able to slow him down much. Corum has a run of 17-plus yards in every game and is averaging 5.8 yards per carry in Big Ten games. He has scored 17 TDs, leading all FBS players, and ranks fourth with 1,187 yards rushing. The Cornhuskers are giving up 183 yards rushing per game, ranking 13th in the 14-team conference and 108th in the FBS.

Nebraska: S Phalen Sanford. He’ll start in place of second-leading tackler Myles Farmer, who was suspended after being cited on suspicion of drunken driving last weekend. Sanford played eight-man high school football in Nebraska and walked on in 2019 after beginning his career at NAIA Hastings College.

Michigan: Corum. The Heisman Trophy candidate has scored in every game, pulling off a feat accomplished by only one other player (TCU’s Kendre Miller).

Cornhuskers interim coach Mickey Joseph is 2-4 since replacing Scott Frost, who was fired after a 1-2 start with a 16-31 record in four-plus seasons. ... Nebraska RB Anthony Grant became the program’s first player since 2018 to have five 100-yard rushing games in a season after running for 115 yards in last week’s loss to Minnesota. ... The Cornhuskers led the Gophers 10-0 in the third quarter before losing 20-13. ... Nebraska launched a four-decade run as one of college football’s premier programs when Bob Devaney’s first team pulled a 25-13 upset of the Bump Elliott-led Wolverines in 1962 at Michigan Stadium. Devaney and Tom Osborne combined for 21 conference titles and five national championships before the program’s decline began in the early 2000s. ... Michigan, top-ranked Georgia, No. 2 Ohio State and No. 4 TCU are the FBS’ undefeated teams. ... The Wolverines are off to their best start since 2016, when they lost their 10th game at Iowa in Harbaugh’s second season, and are 21-2 since the pandemic-shortened season in 2020. ... Michigan is giving up 72.4 yards rushing, No. 1 in FBS, and rank fifth with 250 yards rushing per game.