No. 3 Tennessee hosting UT Martin of FCS for homecoming 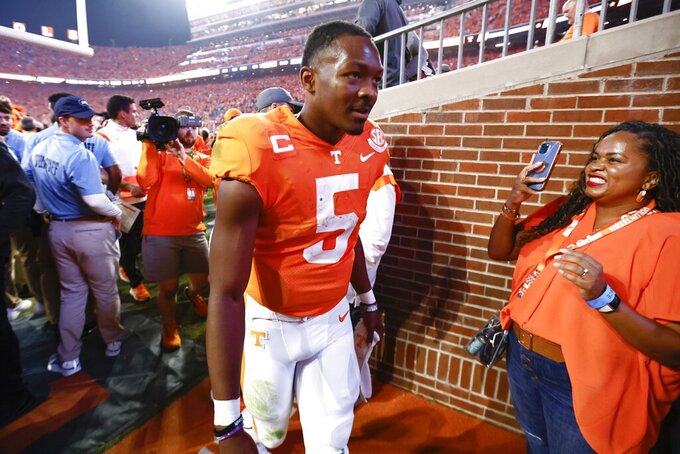 Line: No line, according to FanDuel Sportsbook

All the momentum the third-ranked Tennessee Volunteers built by ending a 15-game skid to Alabama would be crushed if they turn in a flat performance Saturday. This is homecoming and the UT Martin Skyhawks play in the Football Championship Subdivision. UT Martin is having a good season and unbeaten in three Ohio Valley Conference games. This opportunity to play on a big stage could be significant motivation for the Skyhawks if they catch the Volunteers thinking back a week or looking ahead to looming Southeastern Conference showdowns with No. 19 Kentucky or top-ranked Georgia.

Four ranked FBS teams have had trouble figuring out a way to slow down the offense that coach Josh Heupel has put together at Tennessee. It will definitely be a challenge for the Skyhawks to devise a way to defend. The Vols are No. 1 in the nation in total offense (551 yards) and red-zone efficiency (31 of 31). The Skyhawks are giving up 26.7 points and 398 yards a game.

UT Martin: The passing combination of Dresser Winn to Colton Dowell has been prolific. Both in their sixth year of eligibility, Winn has connected with Dowell on 41 passes for 581 yards and three touchdowns.

Tennessee: RBs Jabari Small and Jaylen Wright. The Vols rushed for 182 yards against Alabama. When the Tennessee run game is working, everything else seems to click. Small and Wright are the central figures in opening up the passing game with a ground attack.

Tennessee has its highest ranking since being No. 3 to open the 2005 season. ... The Volunteers shut out UT Martin 50-0 in the only previous game between these schools to open the 2010 season. ... Tennessee is 74-20-3 in homecoming games and has won nine straight against non-Southeastern Conference opponents. ... Tennessee QB Hendon Hooker (187.72) is second only to Ohio State’s C.J. Stroud (207.57) in passing efficiency … Hooker had his streak of passes without an interception end at 260 against Alabama. ... Vols WR Jalin Hyatt leads the country with 10 receiving TDs. ... This is UT Martin's second FBS opponent this season. The Skyhawks lost to Boise State 30-7 in September. ... RB Zak Wallace leads the Skyhawks with 552 rushing yards and 10 TDs.