No. 4 Clemson continues playoff push with trip to NC State 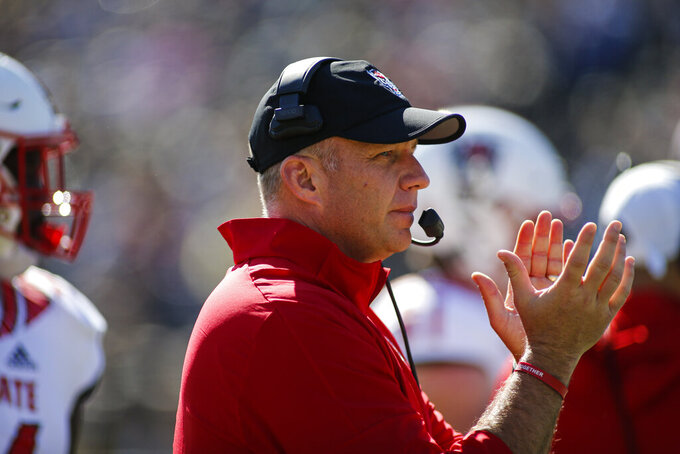 RALEIGH, N.C. (AP) — Clemson coach Dabo Swinney doesn't see a lot of difference between the way the Tigers were playing at this point last year on the way to a national championship and now.

That's why he's not worried about the fourth-ranked Tigers' outside-looking-in position in the first College Football Playoff rankings. If they keep winning, starting Saturday night at North Carolina State, it should all work out with the Tigers back in college football's version of the Final Four.

"If it is about what is on the field, I don't know what else we can do," Swinney said. "We are playing pretty good. We just have to keep playing well. We have had four games in a row that I think we have played pretty clean. But that is a sign of maturity."

Swinney said the Tigers are in a "good spot."

"We have to finish," Swinney said. "I think we are in a very similar position team-wise to where we were last year. That team finished."

North Carolina State has been dealing with a series of injuries and has also been trying to find some consistency at quarterback.

Redshirt freshman Devin Leary is the team's third starting QB this year and got his first start in last week's 44-10 loss at No. 22 Wake Forest, a game that got away from the Wolfpack quickly and never let Leary build confidence.

"Their kids know how to win," Wolfpack coach Dave Doeren said. "But I also know that anything can happen on a Saturday. That's why you put the ball down and play. We've got nothing to lose in this football game. ... That's got to be our mindset."

Some other things to know about Saturday's Clemson-N.C. State game:

The Tigers, on course for a fifth straight league championship, can clinch the ACC's Atlantic Division title with a win and a loss by Wake Forest at Virginia Tech earlier Saturday. The Tigers host the Demon Deacons next weekend.

N.C. State has given Clemson some tough matchups during the Tigers' current ACC reign.

The Tigers won a 56-41 shootout in Raleigh in 2015. A year later, the Wolfpack squandered a stunning road upset against the eventual national champions by missing a short field goal at the end of regulation before losing in overtime.

"We'll be expecting a fight and we'll be ready to play," Clemson quarterback Trevor Lawrence said.

Etienne has gained 640 yards and six touchdowns during the Tigers' four-game romp since their open week. He's needed just 56 carries to do it, exiting games by early in the third quarter with the Tigers typically up big.

Clemson is getting healthier.

Injured defensive end Xavier Thomas is set to play after missing the past three games with concussion symptoms. Offensive lineman John Simpson — he's the senior who wore a Lawrence-style blonde wig to ACC media days — missed the Wofford game due to a sore ankle.

Swinney said both could have played last week against Wofford, but he choose to give them more rest.

N.C. State's secondary has been of particular concern due to injury.

The Wolfpack lost cornerbacks Chris Ingram, Teshaun Smith and Taiyon Palmer to season-ending injuries, forcing sophomore De'Von Graves and redshirt freshman Malik Dunlap into starting roles the past two games. Doeren said the team could get back starting senior cornerback Nick McCloud from an injury that has sidelined him since the opener.