No. 4 Clemson counting on 'Avengers' D-line for a title run 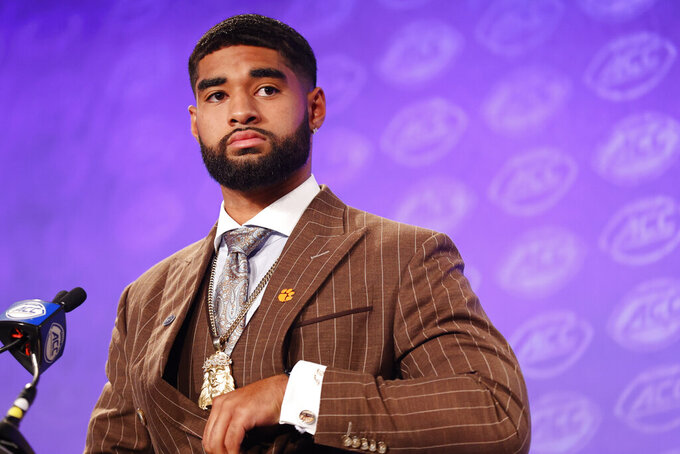 CLEMSON, S.C. (AP) — No. 4 Clemson is pinning its hopes of another championship run on “The Avengers."

The Tigers, 10-3 in 2021 but out of ACC contention by midseason, have a stacked defensive line with experience and depth. They've named themselves after the movie superheroes.

“ I love ‘The Avengers,' my friend ‘XT,' Xavier Thomas loves ‘The Avengers, ’ let's make it happen," Clemson defensive end KJ Henry said when recalling how they came up with the name.

The line of thinking has worked for Clemson in the past.

Four years ago, Henry was a freshman learning the ropes when the starters on Clemson's defensive line — Christian Wilkins and Dexter Lawrence and ends Austin Bryant and Clelin Ferrell — took the nickname, “The Power Rangers,” after the campy, cartoon squad.

They were the anchors on a national title team and the country's fifth best defense.

It was a way for that group to stay motivated and connected with each other, Henry said. He feels the same thing can happen this fall, as Clemson is favored to win its seventh ACC crown in eight seasons.

“It's been fun to kind of put it together,” said Henry, dubbed “Captain America" as a senior who passed on possibly being an NFL draft pick — much like Wilkins did after his junior season before the run to a national crown.

Thomas, a speedy, powerful end is “Thor.” Tackles Bryan Bresee, 6-foot-5, 300 pounds, is the “Hulk,” while Tyler Davis, quick and largely immovable for opponents is “Iron Man." End Myles Murphy is “Spiderman,” mostly, Thomas said, because the main character of the webslinger's film, “Spiderman: Into the Spider verse” was named Miles.

The Tigers will start the season minus “Thor;" Thomas had surgery on his injured foot he sustained in practice last week. He expects to be back in four-to-six weeks.

First-year defensive coordinator Wes Goodwin doesn't care what his guys call themselves. He is excited about where his leaders up front can lead the Tigers this season.

"There’s only one first time,” Goodwin said. “This being the first year as a coordinator, (I have) a lot of excitement, waking up at 4 a.m., just a lot of things running through your mind.”

The excitement on offense is a slimmed down quarterback DJ Uiagalelei. The QB was expected to fit easily into the shoes of national champion Trevor Lawrence. Instead, Uiagalelei looked tentative and out-of-synch last season.

Uiagalelei has lost more than 20 pounds after changing his diet — he gave up sweets and deserts — and has been more decisive as a leader, coach Dabo Swinney said.

“You can tell he’s worked really hard. He’s very conscientious of his fundamentals. He’s hard on himself, grades himself every day, and he’s been good," the coach said.

Clemson recovered from its slow start to win its last six games, and enters this season with the longest current wom streak among Power Five teams. The 10-3 record continued Clemson's run of 11 straight seasons of double-digit wins.

Clemson said goodbye to its “Bruise Brothers” combo at linebacker of James Skalski and Baylon Specter, who were the team's leading tacklers last season. The Tigers appear in solid shape at linebacker with junior Trenton Simpson leading the way. Simpson was third in tackles with 78 and second on the team with six sacks and 12 stops behind the line of scrimmage.

Clemson lost its two longtime coordinators, Brent Venables on defense and Tony Elliott on offense. Goodwin is taking control on defense while quarterbacks coach Brandon Streeter will direct the offense.

Swinney does not often bring in transfers, but he did this offseason with quarterback Hunter Johnson from Northwestern. Johnson began his career at Clemson, but left when it was apparent Trevor Lawrence would be the team's starter. “I call him my boomerang transfer,” Swinney joked.

Clemson will face several critical tests early on and late this season. The Tigers play at No. 22 Wake Forest on Sept. 24, then return home to face No. 13 North Carolina State a week later. November brings another trip to No. 5 Notre Dame — where Clemson lost a memorable OT contest in 2020 — on Nov. 5 and a home game with No. 16 Miami two weeks later.