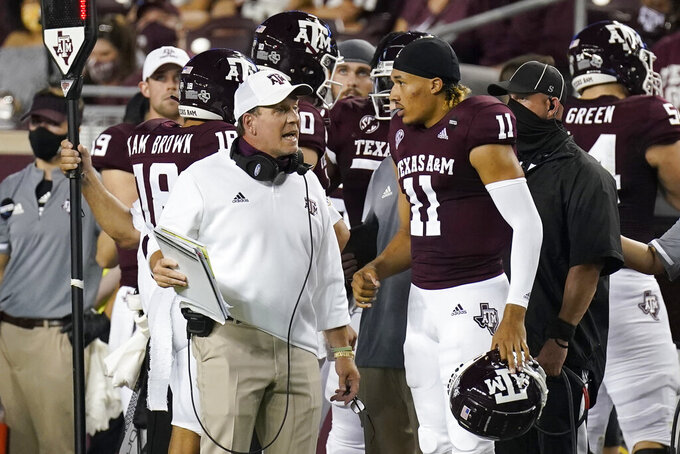 The Gators have played well in decisive wins over Mississippi and South Carolina but will face bigger tests in upcoming weeks with A&M starting a streak of three of four games against ranked opponents. After a lopsided loss at No. 2 Alabama last week, the Aggies could use a win against a top-10 opponent to quiet critics who have started to question if coach Jimbo Fisher has done much to improve the program.

Florida QB Kyle Trask vs. Texas A&M’s pass defense. Trask is tied with three other quarterbacks for second-most TD passes in the nation with 10 this season. But Trask has only played two games while the other players tied with him have played three or four games this year. He’s thrown for 684 yards and has just one interception and will meet an A&M passing defense which is ranked 58th in the country by allowing 292.5 yards a game.

Florida: TE Kyle Pitts is tied for first in the FBS with six touchdown receptions. The 6-foot-6, 240-pound junior has 12 receptions for 227 yards, highlighted by a 71-yard catch.

Texas A&M: QB Kellen Mond has thrown for 507 yards with four touchdowns and an interception this season. He needs just 125 yards passing on Saturday to pass Jerrod Johnson (8,011) for the most career yards passing in school history.

The Gators are averaging 44.5 points a game, which ranks fourth nationally and second in the SEC. They have scored 35 points or more in four straight games. ... The Gators are averaging 357 yards passing. ... The Aggies are 13-0 when leading after the first quarter under Fisher and they’re 12-3 at home in his tenure. ... S Keldrick Carper is five tackles from reaching 100 in his career. ... Senior OL Carson Green has started 31 straight games, which is the longest streak on the team. ... Mond threw for 318 yards against Alabama for the sixth 300-yards passing game of his career.