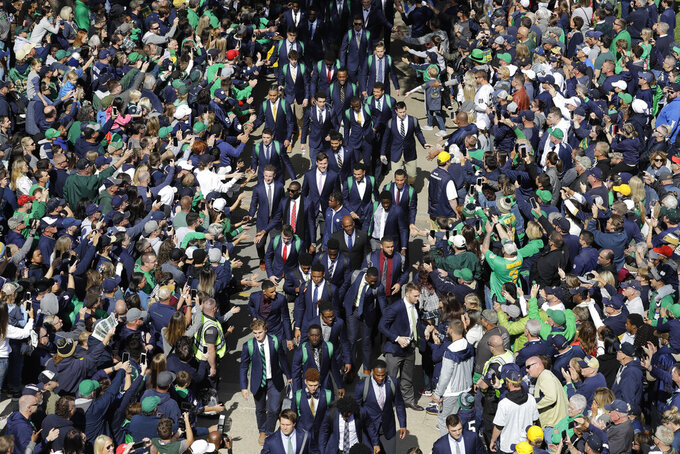 FILE - In this Oct. 5, 2019, file photo, Notre Dame players greet fans as they enter the stadium before an NCAA college football game against Bowling Green, in South Bend, Ind. In a quirk this season, No. 5 Notre Dame enjoys a greater home-field advantage than most of its opponents: As of now, the Fighting Irish are slated to play in front of only one crowd bigger than their own, which is limited to about 10,000 people because of the pandemic. (AP Photo/Darron Cummings, File)

SOUTH BEND, Ind. (AP) — Brian Kelly knows if No. 4 Notre Dame expects to play for championships in December and January, it will need to improve defensively, starting with Saturday’s visit from Atlantic Coast Conference foe Louisville.

After not practicing for nine days and not playing for three weeks because of a COVID-19 outbreak, the Fighting Irish (3-0, 2-0 ACC) allowed 405 yards in a 42-26 victory last Saturday against Florida State. Now the Irish meet second-year coach Scott Satterfield’s Cardinals (1-3, 0-3), who lost their third straight game and second consecutive on the road last Friday at Georgia Tech, 46-27.

With no new positive tests, the Irish should be near full strength for the Cardinals, who have shown an ability to move the football with running back Javian Hawkins (468 yards, 3 touchdowns) and quarterback Malik Cunningham (986 yards, 9 TDs) but have been their own worst enemy with untimely turnovers (11) and sacks (14).

“I think the most glaring thing that stands out is the turnovers,” said Satterfield, whose team outgained the Yellow Jackets 471-450, and had a season-high 242 rushing yards but lost three fumbles. “We were able to move the ball most of the night, but if you turn the ball over, you’re losing opportunities to go down and get points.”

During his Monday press conference, Kelly used his two index fingers to push up the corners of his mouth into a smile to express his feelings about having 6-foot-4 free safety Kyle Hamilton back from the ankle injury he suffered during the 27-13 victory over Duke that forced Hamilton to miss the 52-0 shutout of South Florida prior to the COVID-19 outbreak.

“He’s a difference-maker,” Kelly said of Hamilton, who despite the injury shares the team lead in tackles (15) with rover Jeremiah Owusu-Koramoah. “He plays with physicality. He’s smart. He closes. He’s an eraser.”

Louisville enters the game at minus-2.00 in turnover margin (73rd nationally out of 76 teams ranked). The Cardinals have surrendered the ball 11 times (six fumbles, five interceptions) while coming up with just three enemy miscues (two fumbles, one interception). Protecting Cunningham also has been an issue. He has lost 80 yards on the sacks.

“If they take care of the football, this is going to be one heck of a football game,” said Kelly, whose team has allowed just three sacks.

Before the season, Notre Dame lost wide receiver Kevin Austin Jr. to foot surgery, saw another wideout, Braden Lenzy, miss the Duke opener with a hamstring injury, and lost graduate transfer Ben Skowronek with a hamstring issue against Duke. All are expected to play Saturday, and the speedy Austin, who missed last season for disciplinary reasons, also is expected to return punts with walk-on Matt Salerno.

“We want to get Kevin back in the mix. You’re going to see him in the game at the same time as (Javon) McKinley,” Kelly said. McKinley had five receptions for 107 yards against FSU.

Kelly also revealed Thursday that for the first time since Sept. 8, Notre Dame has no player in quarantine or isolation because of COVID-19.

In addition to fewer turnovers, Satterfield would like to see more big plays from his offense, especially with Cunningham hooking up with receivers Tutu Atwell, Dez Fitzpatrick, Ean Pfiefer and Marshon Ford.

“One thing we haven’t done a good job with so far this year is hitting our deep shots,” Satterfield said. “We have to be a big-play offense because we have big-play players.”

AP Sports Writer Gary B. Graves in Kentucky contributed to this report.

By Aaron Beard 30 minutes ago
By John Raby an hour ago
By The Associated Press 2 hrs ago
By Ralph D. Russo 4 hrs ago
By Bernie Wilson 4 hrs ago